Tom Plate :
Try it, you might like it: A sense of proportion. Avoid the extreme cry of apocalypse now – or at least, of apocalypse soon. Stretch your intellectual and historical horizons to appreciate Japan as an expanse of more than just a few decades, or of even just a few centuries. It is a culture and a people that will endure.
Here are some obvious points. Japan is not about to tip over and fall into the Sea of Japan, not to mention the East China Sea. It is millennia old and culturally deep, as rooted as any society we have on earth. It is an archipelago of almost 7,000 islands, with a population of nearly 130 million. It may be ageing, as is much of Asia, but it is anything but unproductive or spent or destitute.
As Chris Patten, Britain’s last governor of Hong Kong and now chancellor of the University of Oxford, quotes in reviewing a significant new book on Japan: “Japan’s real per capita income has risen 0.9 per cent a year since 2002, faster than the US and Britain; unemployment even in the worst years of recession never rose about 5.5 per cent and was at 4.1 per cent at the end of 2012; social cohesion remains strong; its companies are more global than ever with huge overseas investments. Japan is still by a comfortable margin the third largest economy in the world, with citizens on average eight times wealthier than the Chinese.”
These observations correctly reflect the theme and the tenor of David Pilling’s excellent new book Bending Adversity: Japan and the Art of Survival (Allen Kane). Pilling, whose crisp and informed journalism on Asia in the London-based Financial Times is essential reading, takes the long view about Japan, as it were: Reports of its demise have been greatly exaggerated. This very timely book, as with Pilling’s regular column on Asia, is skillfully written and overflowing with one penetrating insight after another.
It would be “madness”, rightly notes Singapore’s Lee Kuan Yew, the nonagenarian who lived through Japan’s occupation of Malaya, its World War II devastation and its relentless return to prominence, to ever count the Japanese out. But with the mass international news media, still influential despite the splintering by social media, measured assessments are often rare. Remember this? In the 1980s, Japan, the economic powerhouse, was “taking over” the world. But remember this? By the next decade debt-laden Japan was reported to be utterly “lost”. How is such a sharp plunge from near-dominance into near-oblivion possible? It makes no sense. It is media yo-yoing at its silliest.
But at least one major actor bought into the decline line: Beijing. As China’s return to prominence on the world stage was cheered as historic, Japan’s decline was framed in almost funereal terms. As if actually believing that win-lose narrative, Beijing began reasserting old claims almost fearlessly.
When you consider the risks of conflict between the globe’s second and third biggest economies, not just for East Asia but also for the world, is there any bilateral tension as idiotic and pathetic as two elephants shaking their tusks in a quarrel over rocks named (choose your preference) Senkaku (Japanese) or Diaoyu (Chinese)?
And yet that is where the sumo mat has been sat down. As Beijing has been brassily advertising its air and sea territorial claims for all the world to see, in Tokyo the Abe government has been rocking its tusk back in response. If compromise is in the air it is not visible. Collision seems probable.
This could put at risk China’s astonishing economic rise, and Japan’s core relationship with the United States, which for the time being at least has no appetite for jumping into a serious conflict in East Asia. Yet Tokyo stubbornly digs in as China stubbornly persists. Neither political culture appears capable of facing reality, only saving face.
It is impossible to observe the government of Shinzo Abe, prime minister since December 2012, without worrying about whether Japan will now take a bad turn. Let’s face it: For two decades its political culture has veered dangerously close to the resolutely unimaginative. You wonder how such a fabulous country that has spawned the most skillful multinational corporations and universally admired technological products (not to mention phenomenally great literature and awesome art, design and film) can throw up prime ministers and governments of such rigidity and banality as would challenge a satirist to further caricature. One feels great sympathy for the Japanese population, which for decades has remained admirably and even stoically pacifist. But it now faces the reality of a China that has arisen from a long sleep with pent-up energies eager to settle old scores.
And so the Japanese are weighed down with a shogun power culture underling the structure of their dysfunctional party system. The only obvious transformative option would be a reversion to imperial authoritarianism. That would surely prove a cure worse than the disease. But it could just be that China’s new assertiveness will help push Japan in that direction faster than anyone realises.
Veteran US journalist Tom Plate is a professor at Loyola Marymount University. 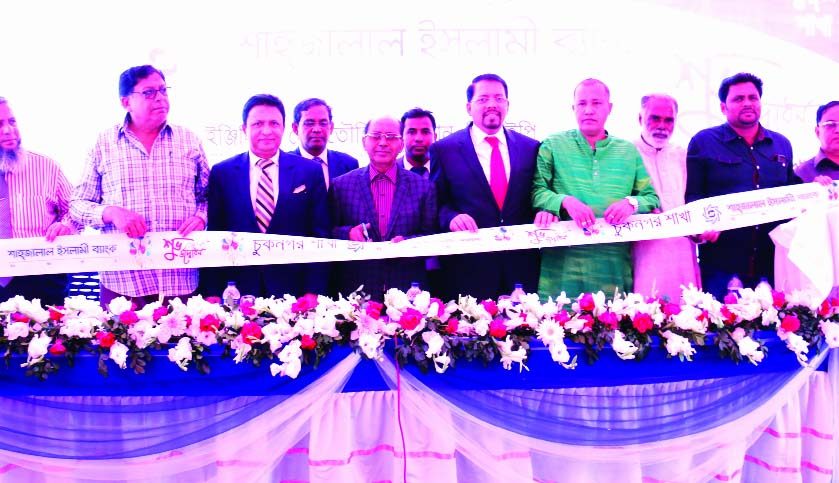 Engr. Md Towhidur Rahman, CIP, Chairman of the Board of Directors of Shahjalal Islami Bank Ltd inaugurated its’ 97th branch at Chuknagar in Khulna recently. Farman R Chowdhury, Managing Director and Abdul Aziz, Deputy Managing Director of the bank were also present in the programme among others.