An alliance of eminent citizens-‘Bangladesh Rukhe Darao’ on Wednesday demanded speedy trial of miscreants responsible for communal attack centering the January 5 elections as well as ban on politics of Jamaat as war criminals and terrorist group.
They also demanded of the government to ensure fast and permanent safety to the areas that are vulnerable to communal attack.
They made the demand after visiting the areas of the minority community that came under communal attack centering the 10th national parliament election.
Dhaka University Emeritus Professor Dr Anisuzzaman, Advocate Sultana Kamal, journalist Abed Khan, DU Associate Professor of Mass Communication and Journalism department Kaberi Gayen, Muktijoddha Jadughar Trustee Board Member Secretary Ziauddin Tareq Ali and member Dr Sarwar Ali made the demands at a press conference at Muktiijoiddha Jadhughar here. Anisuzzaman said victims of the communal attack want to leave the country apprehending insecurity. “It is the responsibility of the government to ensure their security and bring back their confidence,” he said.
Noting that secularism cannot be created through formulating constituency or law, he said “we have to build a social movement against fundamentalist. We have to change mindset of people by creating cultural awareness.”
He said the fundamentalists think that they can reduce the number of voters of a particular political party, if the members of Hindu community leave this country.
Advocate Sultana Kamal said this communal attack is not only against the Hindu community, it is an attack on sprit of War of Liberation. “We have to be united to resist such kind of attack in future,” she said.
Abed Khan proposed for organising a national convention with the present government and all pro-liberation forces. He urged the authorities to ban religious based politics and rid the country of fundamentalism.
A delegation of the alliance led by Professor Anisuzzaman visited Kornai, Pritompara, Telipara of Dinajpur and Goreya and Akcha village of Thakurgaon. 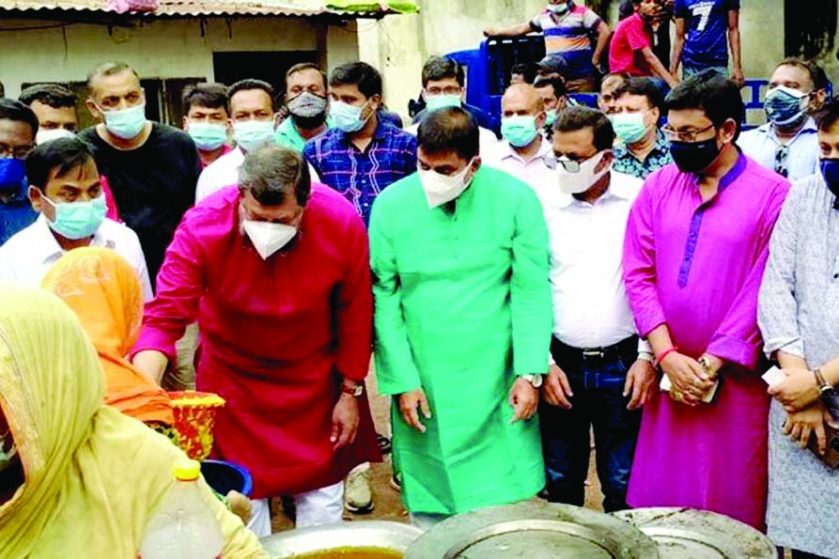 General Secretary of Juba League Mainul Hossain Khan Nikhil speaks at the distribution of food among the poor people organised by Dhaka Mahanagar Dakshin Juba League in the city’s Avoy Das Lane on Thursday. He urged the leaders and activists of the organisation to stand by the destitute during corona pandemic. Acting General Secretary of the organisation Rezaul Karim Reza distributes food.

Thailand to go ahead with polls plan