TNN, Chowhatta :
A broken wooden cot sits in the middle of the gloomy shack. A table fan stands next to it. And in one corner, as if tossed carelessly, is a pair of jeans. “It’s a good thing you did not touch that. It belongs to a rape accused,” said a policeman, collecting evidence.
This was where a tribal girl was gang-raped on the orders of a kangaroo court, as an entire village watched.
The dusty hamlet, some 30km from the district headquarters of Suri, does not show any sign of remorse for the horror that has shamed Bengal before the world yet again. The women vehemently defend their men, insisting that they have been “trapped in a conspiracy.” They tried to stop police from entering the village to arrest the suspects and blocked journalists, too, to “stop them from demeaning their culture”.
Their defiance is striking: children and elderly stand hand-in-hand to express their solidarity. They insist the girl had to be punished because she was “caught in a compromising position with a married man of another village”. “Some of our boys rounded up the duo and brought them to the village. We tied them up but didn’t ask our men to rape her, nor did we demand money. Our elders told the girl to leave the village if she wants to stay with that man. She threatened us that she will not yield. She spoke to someone in Hindi and went to police to get our men arrested,” claimed a woman. They barricaded police, forcing additional SP (Birbhum) Prasanta Kumar Chowdhury to call up additional forces. “Our men are innocent. Why are police interfering in our daily lives?” shouted a mother of four. The ASI posted outside the girl’s hut says he cannot recollect the last time police entered the village. “Perhaps, they don’t realize they have overstepped the law of the land by several miles,” he said.
The lack of education is evident in the village. Ironically, the girl and her lover met while they were both working on the village’s school building. “We always wanted to educate our children,” said a woman, whose husband has been arrested for the gang rape. She adds with sudden anger: “It is this under-construction school that has brought shame to our village. It’s here that the two met. She has brought disrespect to our community.”
A 3km drive on a dusty, pebbled track brings you to this hamlet. It seems to be caught in a conundrum – between urbanity and tribal tradition. With Suri just 30km away, the urban effect is evident here. The youth wear jeans and women were nightgowns. A few have mobile phones. The village doesn’t look as neat and tidy as Santhal villages do. Electricity hasn’t gone to their homes but they hook up with the main transmission lines. “Like you, our youths are up to date. They will never indulge in all this,” said a woman. “I was not there when the incident took place. My uncle Bolai Murdy was the former Morol (headman). But he was unhappy when my father Buju Hembram took over. Hence, it was he who passed the verdict on the girl,” says Sumir Hembram, Buju’s son. 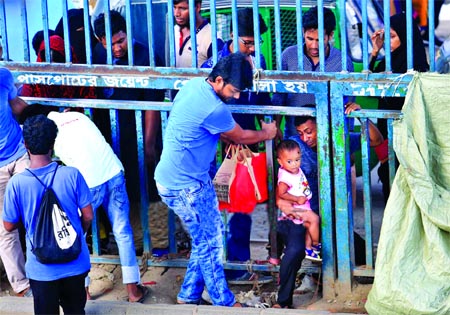 Men and women take the chance of crossing blocked roads quickly even risking their lives in New Market area though the Foot-over Bridge not that far off.