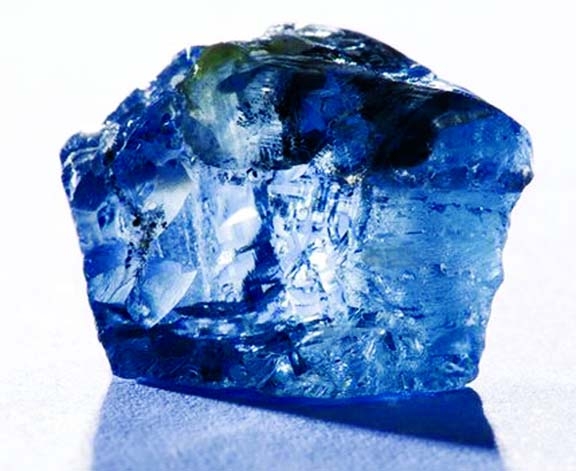 BBC Online :
A rare blue diamond has been discovered in a mine in South Africa. The 29.6-carat stone was recovered by Petra Diamonds at its Cullinan mine, about 40km (25 miles) north-east of Pretoria.
“This stone is one of the most exceptional stones recovered at Cullinan during Petra’s operation of the mine,” the company said. Petra unearthed a 25.5 carat blue diamond which sold for $16.9m (£10.3m) in 2013.
The latest discovery is also expected to sell for a high price.
“The stone is an outstanding vivid blue with extraordinary saturation, tone and clarity, and has the potential to yield a polished stone of great value and importance,” Petra said in a statement on Tuesday.
Cullinan mine has produced hundreds of large stones
and is famed for its production of blue diamonds – among the rarest and most highly coveted of all diamonds.
The mine was acquired in 2008 by Petra Diamonds, which also operates in Botswana and Tanzania.
A similar 26.6-carat blue rough diamond discovered by the company in May 2009 was cut into a near perfect stone and fetched just under $10m at a Sotheby’s auction.
Another deep-blue diamond from Cullinan was auctioned for $10.8m in 2012 and set a world record for the value per carat.
In 1905, the renowned Star of Africa blue diamond – the world’s second largest cut diamond – was discovered at the Cullinan mine.
The pear-shaped 530-carat stone was presented to King Edward VII and became part of the British crown jewels.