Staff Reporter :
Farm credit disbursement by all banks has increased by 16.04 per cent during first six months of the current fiscal as against the same period of the previous fiscal, according to a central bank figure released on Thursday.
Banks disbursed Tk 7450.25 crore farm loan during the July-December period of 2013-14 fiscal compared to Tk 6420.44 crore in the corresponding period of last fiscal (2012-13).
The loans have given to different agro-based sub-sectors like crops, irrigation equipment, livestock, marketing of agricultural products, fisheries and poverty alleviation.
“Agricultural credit disbursement has increased during the period due to the strict monitoring and supervision by the central bank,” a senior central bank official told The New Nation yesterday.
He added: The state-owned and specialised banks used to disburse farm loans in the past, but now the private banks are also disbursing farm loans simultaneously. Besides, the banks having no branches at rural level are disbursing farm loans through NGOs, resulting significant rise in farm loan disbursement during the period under review.
Banks are bound to disburse agro loans as an obligation had been imposed on the banks to ensure that they disbursed at least 2 per cent of their total loans in the agriculture sector, he said.
Agricultural credit disbursement was made compulsory for the foreign banks also, he noted.
Besides, banks recovered Tk 8352.67 crore agro-credit during July-December period of the current fiscal compared to Tk 7091.30 crore in the corresponding period of 2012-13 fiscal, showing an increase of 14.96 per cent loan recovery.
The outstanding portfolio of agriculture loans surged by 13.44 per cent to Tk 31969.75 crore from Tk 28182.86 at end December 2013 compared to same period last year.
The data showed that the banks collectively disbursed 51.05 per cent of their annual farm loan target in the first six months of the current fiscal, while 45.44 per cent of the target was disbursed during the same period of the last fiscal.
Earlier, Bangladesh Bank (BB) has set agricultural loan disbursement target for foreign and local banks at Tk 14,595 crore for 2013-14 fiscal. 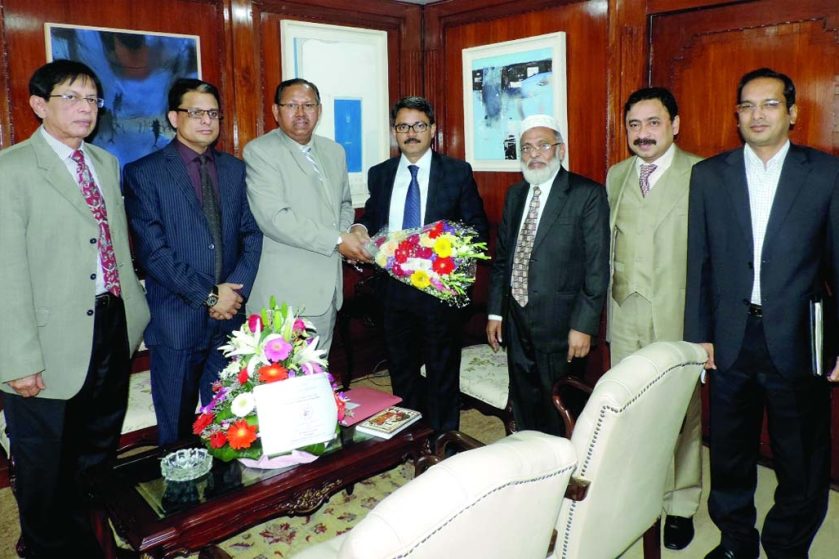 A delegation of Bangladesh Indenting Agents’ Association (BIAA) led by its President KMH Shahidul Haque met with State Minister for Foreign Affairs Shahriar Alam at the latter’s office on Tuesday.

BNP Acting Secretary General Mirza Fakhrul Islam Alamgir speaking at an opinion sharing meeting with the leaders of Hindu-Bouddha-Christian Oikya Parishad at the party central office in the city’s Nayapalton on Thursday.