Pro-BNP and Jamaat teachers of Dhaka University (DU) on Tuesday formed a human chain in front of the Vice-Chancellor’s residence, demanding cancellation of the 10th parliamentary election.
About 150 teachers from all departments and faculties of the university participated in the programme held at noon.
The teachers said that without opposition parties’ participation, the 10th parliamentary election had lost its credibility. Dean of Arts Faculty Professor Sadrul Amin Presided over the programme while Professor Tajmary SA Islam, Professor Rashidul Hasan, Professor Morshed Hasan Khan of Marketing Department, Former General Secretary of DU Teachers Association (DUTA), Professor ABM Obaidul Islam, former Provost of Rokeya Hall Professor Laila Noor Islam, former Provost of Shaheed Sergeant Zahurul Haque Hall, Professor Zahidul Islam, Professor Amanur Rahman Majumder, Professor Akhter Hossain Khan, Professor Abul Hasnat of Clinical Pharmacy and Pharmacology Department, Dr Sayla Akhter of Institute of Education and Research, Sabrina Shahnaj of Fine Arts Faculty and Israfil Ratan of Graphic Design Department, were present, among others. The teachers said the government held a farcical election. It will not be acceptable at home and abroad.
“The UN Secretary General has asked all parties to ensure polls atmosphere while the US government has advised to hold a participatory election soon. The other international community members have been disappointed for not holding a free and fair election. So, the government should consider their opinion. At home, most of the people are unhappy and they are ready to protect democracy,” they said.
“We fought against the Pakistani rulers in 1971 and then struggled to establish democracy in the country. So, now we are ready to save it again,” they said. 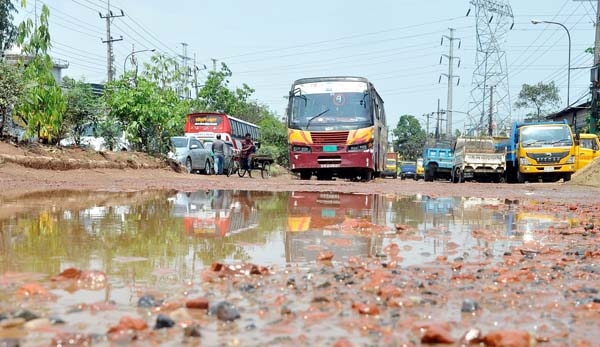 Vehicle movement has been hampered on Dhaka – Chattogram Highway due to nor’wester on Sunday.

Attack under way on Afghan forces in Kabul: Official