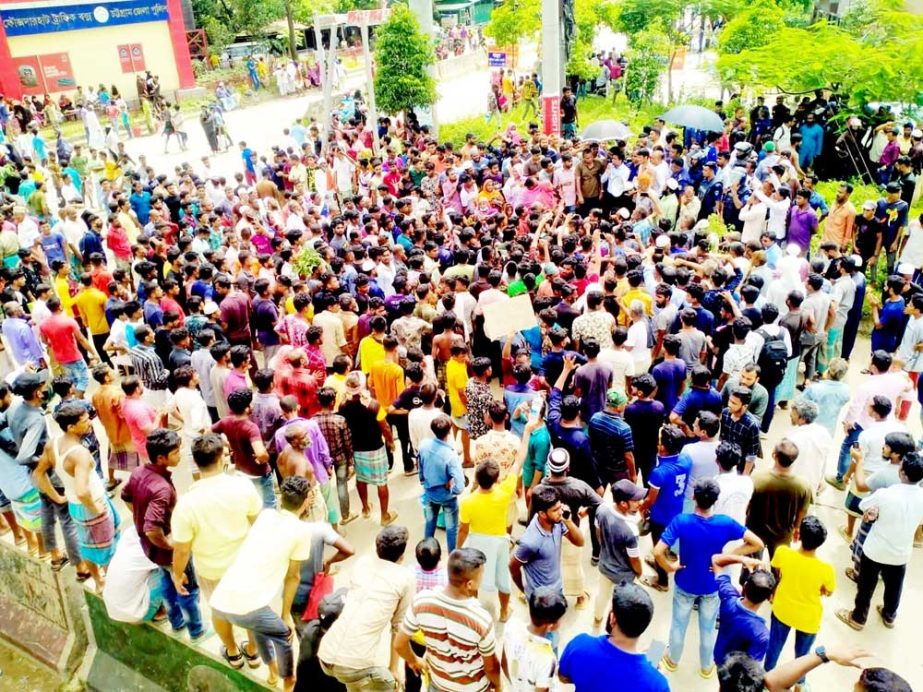 Hundreds of residents are occupying the hill in Salimpur forest of Sitakunda upazila area are protesting against the disconnection of electricity and water lines to the
illegal houses built by occupying blocking the Dhaka-Chattogram road. Such a sudden movement
has caused severe traffic jam on the Dhaka-Chhattogram ittagong highway. A long traffic jam of at least 20 kilometres from Faujdarhat to Kumira was observed during the agitation.
On Tuesday at 10:30 am, hundreds of residents of the area took a position on the Bayezid Link Road from Fauzdarhat. Later, Fauzdarhat Bayezid Link Road and Fauzdarhat-Bander Road of Dhaka-Chattogram highway were blocked.
A large number of police and law enforcement personnel are present at the spot to prevent any untoward incident.
Bayezid Bostami Police Station OC (Investigation) Mohammed Hossain confirmed the matter.
He said, “The residents of Alinagar have blocked the road. But when we block the link road, they move to other places. No untoward incident has happened so far.”
Earlier, the Chattogram district administration took the initiative to decorate the forest of Salimpur under Sitakunda upazilla as part of the implementation of the government’s master plan including the relocation of the prison. Various mega projects including prison and night zoo in Salimpur forest were also informed by the district administration. That is why the district administration conducted several rounds of operations to remove the structures on these government hills. But every time the eviction administration had to come under fire from the locals of Salimpur.
Last July 15, a UP member of Salimpur Union was beaten up in front of government officials. In this incident, the UP member’s younger brother filed a case with the police station and arrested an accused named Yasin on July 18.
It is known that after taking the initiative to recover the government land of Salimpur forest and remove the illegal structures, all the electricity and water connections of the area were disconnected. Since then, the residents of Salimpur have protested several times for water and electricity. They demanded speedy reconnection of electricity and water and rehabilitation of the victims. Mohammad Alam, a resident of Salimpur forest, who participated in the movement, told reporters that the residents of Salimpur forests are unable to sleep at night due to lack of electricity. They have suffered indescribably because they could not fetch water. So, unable to bear it anymore, they first blocked Bayezid road from 10:30am. Later they blocked the Faujdarhat Link Road area of the Dhaka-Chattogram highway to bring it to the attention of the government. Meanwhile, some agitating media workers were attacked after newsmen went there after getting the news of the incident. They allege that the media is helping the government to evict them from the Salimpur forest. Ashraful Alam, Assistant Commissioner (Land) of Sitakunda Upazila, said that the agitators were agitating for electricity on Bayezid road. Later suddenly Faujdarhat Link Road came. “We have been talking to them and trying to get them off the highway.” Sitakunda Circle Additional SP Ashraful Karim said, “We are trying to remove the aggressive people from the highway.Sitakunda Upazila Executive Officer Shahadat Hossain also said that the blockaders are being asked to leave the road.”

UNB, Dhaka :The UN expert team will share its full report on Sundarbans oil spill incident today in the city. The UN Sundarbans Oil Spill Response Mission, comprising of multi-disciplinary experts from seven different countries, including Bangladesh, had visited the Sundarbans from December 22 to December 28.“The team has now completed its report and will release it officially here,” an official involved in the process said.The team will meet the media at the Centre on Integrated Rural Development for Asia...
1 Mar 2015, 12:00 am

Members of a high-powered delegate from Cardiff Metropolitan University (CMU), UK are seen at a photo-shoot at Daffodil International Academy in the city recently.