No possibility of mid-term polls; BNP must shun path of violence and cut ties with Jamaat: Minister

Foreign diplomats stationed in Dhaka on Thursday stressed the need for holding an immediate dialogue between the government and opposing parties to take Bangladesh towards the next level of democracy and development trajectory.
“We believe a peaceful, democratically stable, and socially, economically and environmentally sound Bangladesh would prove to be an asset for South Asia, the Asia Pacific, and the world in general. We seek your support in making that happen,” said Shahriar Alam, State Minister for Foreign Affairs.
He made the request while briefing foreign diplomats stationed in Dhaka at the UNCLOS conference room of the Foreign Ministry highlighting government’s position after the much-talked about January 5 polls.
Mentioning that it is time for Bangladesh to continue to work together with the international community, Alam told the diplomats that the government’s offer to have dialogue with BNP is in place provided it cuts ties with Jamaat and shun the path of violence.
“To our mind, as affirmed by the Prime Minister, this (dialogue) can only happen provided the BNP decides to shun the path of violence and subversion, and also disentangle itself from the clutches of Jamaat,” he said.
Responding to a question after the briefing, Alam said no diplomat disagreed with his views.
Asked about a possible mid-term election, he said: “It’s too early to make any comment…we’re not feeling any pressure (from international community). There has been no threat, even no indication of pressure (from any diplomat).”
Replying to another question, the state minister said probably some countries are reluctant to congratulate the new government in ‘an effort to put pressure’.
US Ambassador Dan W Mozena, British High Commissioner Robert Gibson and head of the European Union (EU) delegation to Bangladesh William Hanna talked to the press after the briefing and referred to their previous statements which came from their respective headquarters.
The three diplomats almost talked in the same tone as they expect an offer from the government to ‘restart’ dialogue as soon as possible to find a way forward for having fully participatory elections.
Mozena said: “I was also encouraged by very clear call that all violence must stop, specially the violence that is directed against minority communities. These are very positive statements from the new Minister of State.”
He hoped that the two major parties – Awami League and BNP – will find a way forward to ‘restart’ the dialogue the soonest for having elections as soon as possible.
The US envoy mentioned that they saw some positive steps from both sides – BNP chief’s press conference and response from some quarters in the ruling party on Wednesday. “So, these are all encouraging steps, encouraging development.”
British High Commissioner Gibson said he took the opportunity to remind the new State Minister about the statement of British Senior Foreign and Commonwealth Office Minister Baroness Warsi where she highlighted the violence and intimidation that have taken place in Bangladesh before, during and after the elections. “In her statement, she recognized constitutional aspects of the elections. She also expressed disappointments that the elections were not fully participatory.”
Quoting Warsi, Gibson said she reminded that the government of Bangladesh and all parties have responsibility to ensure the ‘correct democratic accountability’ of the country. “She expressed her hope that dialogue would take place quickly and promptly to address the shortcomings.”
William Hanna also referred to the earlier statements issued by the EU. “So, I said that we are hopeful there would be an offer of dialogue from both side as soon as possible.”
In the briefing, he also pointed out that there have been lot of interest in the EU and they wanted to try and support that there would be a dialogue as soon as possible.
Around 50 diplomats from various countries including Indian High Commissioner Pankaj Saran, Chinese Ambassador Li Jun and UN Resident Coordinator Neal Walker were present at the briefing.
Of them, representatives of the USA, UK, EU, Italy and Korea raised questions on various issues, said an official.
Foreign Secretary M Shahidul Haque, DG (External Publicity) M Shameem Ahsan, and DG (UN) Saida Muna Tasneem were also present. 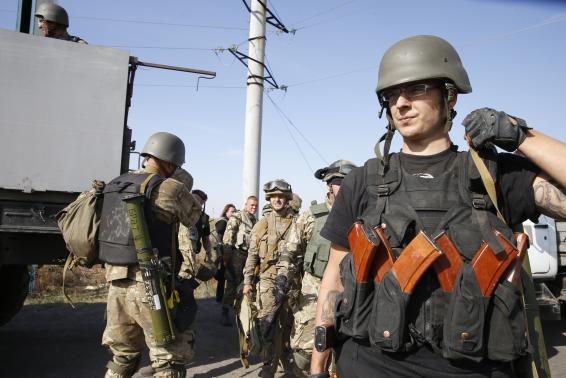 Ukraine and rebels back peace plan, ceasefire from Friday