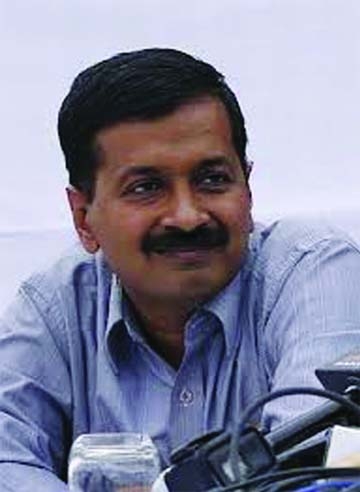 Reuters, New Delhi :
Sleeping on the pavement, conducting official duties from a parked car and calling himself an anarchist in a sit-in protest against the police, Delhi chief minister Arvind Kejriwal has taken an unconventional approach to governing India’s capital.
On Tuesday, a shivering Kejriwal emerged from under a blanket after sleeping outside in the cold January weather. Coughing and struggling to speak, he declared that his protest against alleged inaction by the New Delhi police was indefinite and he would not move from the site, one of India’s most sensitive areas where top ministries are located.
“I am of the opinion and perhaps the public is also of the opinion that in any given area, at least 90 percent of the crime happens in connivance with the police,” he told supporters on the second day of the sit-in.
The corruption-fighting former activist was elected in December on promises of fixing problems faced by the common man in the chaotic city of 16 million people.
His one-year-old Aam Aadmi Party, or Common Man Party, is now using its success in Delhi to build a national presence ahead of a general election due by May.
But he has been criticized for his style of governing, after a near stampede blighted a meeting where he called on Delhi residents to air their grievances and one of his ministers was filmed shouting at police.
His head wrapped in a woolly scarf, Kejriwal called on supporters to join him at the protest site, a move that could disrupt a major military parade due on a nearby street on Sunday, the anniversary of India’s constitution.
When an unseasonal rain storm drenched a crowd of couple of hundred supporters, Kejriwal retreated to his trademark blue Maruti Wagon R, a low-cost car favored by the city’s taxi drivers, and held a cramped meeting with aides.
In the first three weeks in office he has transferred dozens of officials accused of graft, slashed electricity and water prices and refused the posh housing and security that comes with his new job in an attack on hated VIP culture.

AFP, Abu Dhabi :Omar Abdulrahman, arguably Asia’s biggest star, was crowned AFC player of the year in a glittering ceremony in his home country of United Arab Emirates on Thursday.The left-sided midfielder and winger is the second Emirati to win the trophy in consecutive years and his award was greeted with a huge cheer in the Emirates Palace Hotel in Abu Dhabi.The victory was even sweeter as he was nominated last year but lost out to compatriot, Ahmed Khalil.But the...
December 3, 2016

Shock and mourning in BD