Where privilege and class count

Rahul Singh :
I HAVE a “fix” I cannot do without. In fact, I have had it since I started working as a journalist some half a century ago. No, it has nothing to do with alcohol, drugs or tobacco. It is simply the need to read a large number of newspapers and magazines first thing in the morning, with my breakfast. And then, later, to watch the news channels to find out their comments on the latest political and economic developments.
If, for some reason, my newspapers – and I get seven of them daily – are not delivered at my doorstep, I feel at a loss, as if my day has started badly and is not complete. My younger friends ask me, a little irritated at my old-fashioned ways, “Why don’t you go online? You can get all the world’s main newspapers and the latest news on the Internet.” My reply irritates them even more. “I like the feel of newsprint on my fingers,” I say.
Anyway, the point I am making is that I spend at least two to three hours every day reading a lot of newspapers and magazines. Much of what I read is trivial but every now and then I find a nugget in the unlikeliest of places, and it sets me thinking.
I saw this particular one some time back in an Indian fortnightly that not many Indians read, The Milli Gazette. The paper is directed mainly to Muslims. However, the news item I am referring to had nothing to do with Muslims. It was written by Jogishwar Singh, a Sikh and former officer in the elite Indian administrative service (IAS). The editor of the paper had put the item as its lead story on page one. Jogishwar Singh, now a Swiss citizen, related what he saw in Switzerland on the TV news one evening:
“The Swiss President, Ueli Maurer, was leaving on a five-day state visit to China. The news showed him arriving at Zurich airport in an ordinary private vehicle. The president got out of the car by opening the car door himself. He walked to the nearby baggage trolley stand outside the airport entrance. He took a baggage trolley out, rolled it towards the car, lifted his suitcase and travel bag himself, put these on the trolley which he then rolled towards the entrance, like any other passenger. He walked up to the check-in counter with just two other persons walking behind him. He checked his luggage in for a commercial flight, without any special treatment being meted out to him.”
The writer goes on the say that as an IAS officer who had dealt with Indian government ministers he was struck by the contrast between what he had seen on his TV screen and his experience in India. “The Swiss president represented one of the finest examples of democracy for me,” he commented. He went on to say, “It made me proud to be a citizen of a country where the serving president behaves like an ordinary citizen and does not feel the need to consider special privileged treatment as his divine birthright.”
How right Jogishwar Singh is! Not only did the Swiss president’s conduct represent democracy at its finest, it displayed true “socialism”, a much abused and misinterpreted word, in action. Most people think of Switzerland as “capitalist”, whereas India is “socialist”. But if socialism means greater equality and more equitable distribution of income, as it should, Switzerland is a much more socialist country than India.
Despite its socialist pretensions, India remains essentially a feudal, inegalitarian society, where privilege and class count for much more than ability and hard work. That is a harsh comment for me to make but it is the sad reality.
However, in India at least, I see a ray of hope in the newly formed Aam Aadmi Party (AAP) and its stunning debut in the Delhi election. It has campaigned against corruption, better governance and greater accountability. It also wants a more egalitarian society. Its appeal cuts across caste and class, high and low. It found an echo in the recent court ruling on the misuse of the “lal batti” (the flashing red light beacon) on top of cars. Initially meant only for emergency vehicles like those belonging to the police and ambulances, it is commonly used by all sorts of politicians and government officials to show their importance. That will now hopefully end.
I am now waiting for the day when an Indian president goes on a state visit abroad, using a private vehicle to go to the airport and putting his own luggage on the baggage trolley. I suspect I will have a long wait. 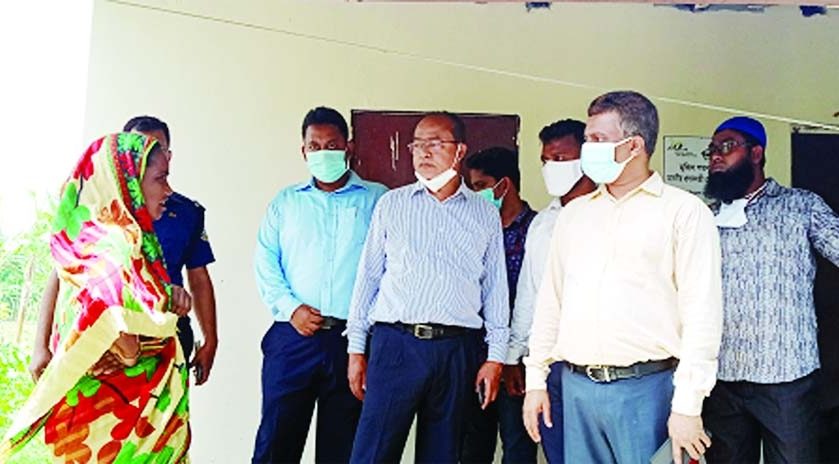 Deputy Commissioner of Patuakhali Md. Kamal Hossen talks with a woman on Wednesday while inspecting the gift-homes at Rangabali upazila of the district provided by the Prime Minister Sheikh Hasina on the occasion of birth centenary of Bangabandhu Sheikh Mujibur Rahman.