admin
Pasuk Phongpaichit & Chris Baker :
Even as demonstrators were spreading across Bangkok, they were losing ground with a constituency whose support they badly need: The urban middle class.
The protesters – themselves mainly from white-collar backgrounds – are intent on bringing down Prime Minister Yingluck Shinawatra. She was elected in 2011 on promises to revive the popular policies of her elder brother, Thaksin Shinawatra, who was prime minister from 2001 until he was ousted in 2006. But her opponents are claiming that the government is corrupt, and those policies ruinous.
Meanwhile, the threat of violence is growing: Dozens of people were wounded on Friday when an explosion hit anti-government demonstrators marching through the city.
The government has tried to mitigate the crisis by calling an early election, for February 2 – even though that will not improve its legitimacy. The Democrat Party has said it will boycott the vote; it wants nothing less than Yingluck’s departure.
This was what the protest leader, Suthep Thaugsuban, was hoping to achieve when he called, earlier this month, for vast protests to try to shut down Bangkok. But the demonstrations have threatened to become so disruptive to everyday life and the economy that even people who support the opposition are being turned off it. This is a significant shift, for it presents Thailand with an eleventh-hour opportunity to find a peaceful resolution to the deadlock.
The standoff is the latest round in a conflict that began in 2006 when the army toppled Thaksin on grounds of abusing power and offending the monarchy. The next election restored a pro-Thaksin government, sparking mass protests by the so-called Yellow Shirts; more instability ensued. After yet another election in 2011, won decisively by Yingluck, opponents of the Shinawatras have repeatedly tried to stir up public opposition and vainly appealed to the generals and the palace to throw her government out.
The crisis exploded in late October when the government clumsily attempted to pass an amnesty bill that would have allowed Thaksin to return to Thailand and even possibly reclaim his seized assets. There was an immediate outburst of anger, which then matured into more general discontent with the politicians in power.
At first, in the fall, the demonstrations were brilliantly devised for urban white-collar workers: Messages on social media invited flash mobs to convene over the lunch break at intersections served by mass transit and on Sundays for major gatherings. Since then, the protesters have marched around the city along the routes that the so-called Red Shirts backing Thaksin had followed in 2010 when they were demanding a new election. The protest leaders have proposed no attractive alternative to the Yingluck government – just the vague notion of creating a “people’s council” that would set up an interim government and oversee a reform agenda (still to be determined).
After Thailand’s leading English-language daily, The Bangkok Post, called the demonstrators its “people of the year”, the paper’s editorial writers began lambasting Suthep for disrupting the city, provoking violence and wrecking the national economy. Other media outlets also have cooled down.
This is a chance to get beyond the current political impasse. The Democrats strongly supported the protests at first, but have moved quietly into the background over recent weeks. Dissenting voices in the party have pressed its leaders to accept the government’s recent proposals to set up a process for reform and to drop its boycott of the election.
The Election Commission has proposed delaying the voting by several weeks so that more candidates can be registered – demonstrators have blocked registration in several constituencies – and the Democrat Party can reconsider its boycott. So far, the party is still refusing to participate.
Unless the party changes its position, it risks losing even more support among the urban middle class. Without some such compromise, Thailand will slide toward an election that cannot resolve the crisis and may be marked by violence, perhaps even a coup.
Pasuk Phongpaichit, professor emeritus of political economy at Chulalongkorn University, and Chris Baker are the authors of Thaksin: The Business of Politics in Thailand 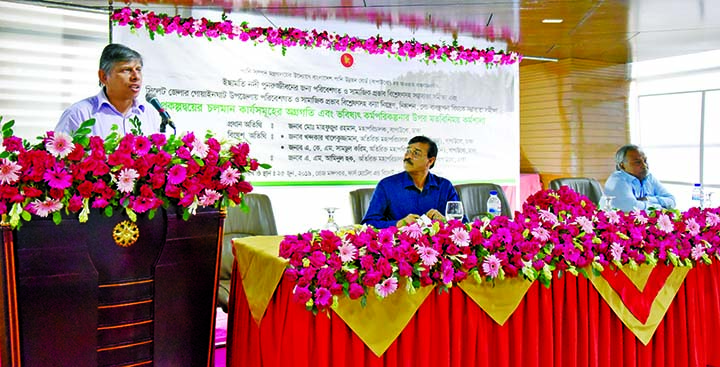 Director General of Bangladesh Water Development Board Mahfuzur Rahman speaking at a workshop on ‘Flood Control and Irrigation Management’ at a hotel in the city on Tuesday.

Deepa, Sweety, Tania Brishti in a serial for two years