Syria’s opposition and government have met briefly face to face in what is being hailed a small but significant step in talks aimed at “saving Syria”.
The initial gathering in Geneva lasted half an hour mediated by the UN’s Lakhdar Brahimi, reports said.
Delegates in Geneva are aiming at small concessions, not a full peace deal.
“Ending terrorism and violence” is the top priority, Syrian officials say. They insist it is too early to discuss President Bashar al-Assad’s position.
So far so good. A short face-to-face meeting between the two sides – carefully choreographed, it seems, to avoid any fireworks. In the heart of the grand Palace of Nations that is the UN headquarters in Geneva, the two delegations filed in and sat down at a U-shaped table, but said nothing to each other.
Only the UN mediator Lakhdar Brahimi spoke. Then they all filed out again.
According to sources on both sides, all 15 members of the opposition were there, but on the Syrian government side, only nine. Missing were government ministers including the delegation head, the Syrian deputy prime minister and Foreign Minister Walid Muallem.
If little could go wrong, given the stiff formality of this first brief morning meeting, this afternoon may be a better gauge of whether the two sides can work together. The plan, say sources on both sides, is to discuss getting an aid convoy into areas in and around the old city of Homs besieged by government forces. It’s something the UN has been working on behind the scenes already and is anxious to get movement on as soon as possible. One opposition participant said there was already agreement in principle from rebel brigades in the area to hold a ceasefire.
As for the more tricky political questions surrounding a transitional government and what this might mean for President Assad, it is interesting that multiple sources, including the Damascus delegation, are saying they might start discussions on Monday. It’s a subject which could make tempers fray quickly, so a more risky issue to tackle. But there are indications that all sides are planning to be in Geneva until the end of next week before pausing for a break. That, too, must be a positive sign.
The BBC’s Lina Sinjab, in Geneva, says diplomatic efforts are concentrating on trying to build confidence between the two sides with small achievements like localised ceasefires, release of detainees and the opening of humanitarian corridors.
There is hope that such steps will pave the way for the discussion of wider issues like political transition next week, although there has been no sign of common ground on this so far.Shortly after the meeting, the chief of staff to the leader of Syria’s National Coalition, Monzer Akbik, claimed that the transition process had started in earnest.
“Today we had the chance to speak directly to regime… You know dictators usually, they don’t like to listen. But today they had to listen to us and to the voice of the Syrian people that they want transition from dictatorship to democracy.”
However Syria’s Ambassador to the UN Bashar Jafari – part of the government delegation – earlier told the BBC that it was “too early” to talk of Assad stepping down and that the issue was “not the priority”.
“Item number one should be putting an end to the terrorism and to the violence,” he said.
The envoy said the common ground between the parties “should be that we should talk about everything, everything, without any selectivity… and no preconditions and no hidden agendas”.
But he accused the coalition delegation of harbouring “personal hatreds towards the government for whatever reasons”. Syria’s civil conflict has claimed well over 100,000 lives since it began in 2011.
The violence has also driven 9.5 million people from their homes, creating a major humanitarian crisis within Syria and for its neighbours. The delegates are still not prepared to talk to each other directly, but are expected to communicate via Brahimi.
The two sides entered and left the room for their initial meeting through separate doors and were due to meet again at 16:00 local time (15:00 GMT) for discussions on humanitarian matters.
Preliminary talks began on Wednesday in Montreux, and Brahimi spent Thursday and Friday attempting to persuade both sides to agree to meet face-to-face. On Friday, the government’s delegation reportedly threatened to quit the talks unless “serious” discussions were scheduled for Saturday.
The opposition and government are fundamentally divided over the aims of the conference.
The government delegation has said the main issue of the talks is finding a solution to foreign-backed “terrorism”, by which it means the whole of the armed opposition.
The opposition, however, had insisted that the regime commit in writing to the 2012 Geneva I communique, which called for a transition process. The communique urged Syria to form a transitional governing authority that “could include members of the present government and the opposition and other groups”. 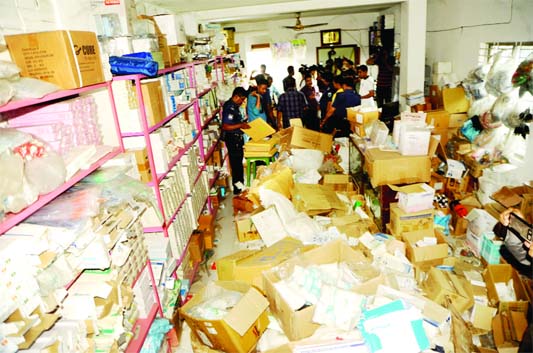 District watch in pictures: BOGURA: Medicines stolen from government hospitals were seized from a multi-storey building at Mofiz Pagla Crossing on Sunday.

Information Minister Hasanul Haq Inu along with others holds the copies of a book titled ‘Sangbadpatre Bangabandhu’ at its (third part) cover unwrapping ceremony in the auditorium of Press Institute of Bangladesh in the city on Thursday.