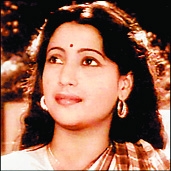 Agencies :Veteran Indian actress Suchitra Sen has died in the eastern city of Kolkata, aged 83. She had been admitted to a hospital in the city last month with a chest infection and her condition worsened on Thursday night, doctors said.Showing respect to that wish, neither the doctors attending on her, nor the hospital authorities, would comment on the death of Suchitra Sen.But the word went out unofficially that the actress is no more and all television channels began airing the news, and film veterans also started offering condolences.West Bengal Chief Minister Mamata Banerjee rushed to the hospital as the news of her death broke. “An era has ended,” remarked veteran actress and film director Aparna Sen. Known as the Greta Garbo of India for leading a reclusive life after she left films, Suchitra was an iconic star of regional Bengali cinema.She also acted in a number of Bollywood films such as Devdas and Aandhi.Suchitra Sen teamed up with Bengali star Uttam Kumar to form a popular pair that delivered a series of hits in Bengali cinema for over two decades. But for the past three decades since she quit the world of films, Suchitra Sen led the life of a recluse, and never seen in public. Her family also did not want her death to be publicised. She quit films in 1978 and led a hermit-like existence, reportedly refusing to meet people outside her own family. She had not been seen in public or photographed in the past three decades. “As one half of one of Indian cinema’s most popular and abiding screen pairs, Suchitra Sen redefined stardom in a way that few actors have done,” film critic Saibal Chatterjee said.”While she and Uttam Kumar reigned over Bengali films for over two decades, her Garbo-esque retreat from the public life after her retirement only strengthened her allure.” Saibal Chatterjee said Suchitra Sen “combined understated sensuality, feminine charm and emotive force and a no-nonsense gravitas to carve out a persona that has never been matched, let alone surpassed in Indian cinema.”Suchitra Sen made her debut in 1953 with the hugely popular comedy Share Chuattar (Seventy-four-and-a-half), which was also her first film with Kumar. Her performance as a nurse hired by a psychiatrist to develop personal relationships with male patients in the 1959 film Deep Jwele Jaai was hailed as one of her best.The late Bollywood star Dev Anand, who acted with her, once described Sen as “the doe-eyed, dusky beauty and immensely popular star of Bengal.”Suchitra Sen is survived by her actress daughter Moon Moon Sen. Her grand daughters, Riya and Raima Sen, are also actresses.

Kidnapped businessman yet to rescue

Ishwardi (Pabna) Correspondent :A businessman named Hridoy Hossain (24) was not rescued from Ishwardi even two days after his abduction. It is learned that Hridoy was abducted from Rooppur Tinbattala area of Pakshi union of the upazila around 9:15 am on Saturday.He was abducted in a public microbus. Later, the kidnappers called his family members from his mobile phone and demanded a ransom of Tk 40 lakh from his relatives. Hriday is the son of Majnoor, adjacent to the new...
December 14, 2021

Journalists bring out a procession at Bakshiganj in Jamalpur on Monday demanding withdrawal of all cases filed against them.