Zimbabwe’s unpaid and frustrated cricketers will have a second meeting with their board chairman to try to end a two-month strike that has already caused the cancellation of Afghanistan’s first overseas tour.Captain Brendan Taylor told The Associated Press on Tuesday that players met with Zimbabwe Cricket chairman Peter Chingoka over the weekend and will sit down again on Wednesday in an attempt to “resolve the current crisis and give cricket a lifeline.”The Zimbabwe board’s long-running financial crisis has threatened the team’s preparations for the World Twenty20 tournament in Bangladesh starting in March.”We feel this has gone on for too long and in the process we have lost lots of valuable practice time,” Taylor said. “(We) would want to get over it and concentrate on the core business, which is playing cricket, especially considering that we have the World T20 coming up soon.”Zimbabwe’s struggling cricket board owes $15 million to a local bank and has applied to the International Cricket Council for another loan of $3 million.It canceled this month’s Afghanistan’s tour and was also unable to host Sri Lanka late last year because of money problems. Players boycotted domestic matches last month because they hadn’t been paid.Zimbabwe’s series against Pakistan last year was also marred by problems over the non-payment of players and the Zimbabweans threatened to go on strike then before a short-term solution was found.After the players were promised payment, Zimbabwe beat Pakistan in the second test for its first victory over a major cricket nation in over a decade. However, players won’t play this time until they are paid, Taylor said.”While we would want to get back to the game as soon as possible, the group’s feeling is that it’s quite difficult for us to do so until ZC have met their end of the bargain,” Taylor said. 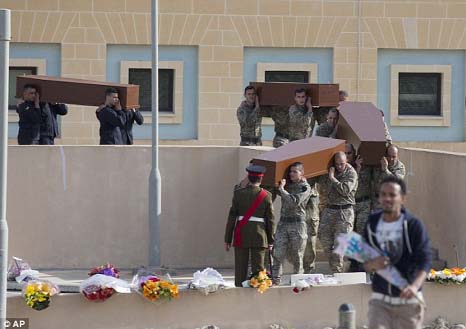 EU leaders ‘will allow just 5,000 migrants who cross the Mediterranean to settle in Europe’

Trump’s AG under fire over contacts with Russian envoy

Colorado Rockies’ Nick Hundley (center) celebrates with pinch-hitter Daniel Descalso after Descalso drove in the winning run, as San Diego Padres second baseman Alexi Amarista walks past at the end of a baseball game on Friday in Denver. Colorado won 8-7.