Xinhua, Madrid :
The number of people looking for a job in Spain fell by 69,000 people in 2013 to a total of 5,896,300 people, official figures showed Thursday.
According to data released by the Spanish National Institute of Statistics (INE), unemployment decreased for the first time in annual terms since the second quarter of 2007.
Meanwhile, according to the Inquest into the Active Population (EPA), Spain’s unemployment rate stood at 26.03 percent, rising by 0.05 percent from the previous rate of 25.98 percent of the third quarter of 2013 and increasing by 0.1 percent when compared with 2012 rate, 26.02 percent.
The INE reported that the number of people in working age fell by 267,900 people to a total of 22,654,500, a 59.43 percent of the total population, which meant the lowest rate since 2008.
The Institute also said that a total of 198,900 jobs were destroyed in 2013, the lowest figure over the last five years.
The low figure of people in working age meant that many people, still unemployed, were not considered as part of the labor force, as the INE does not include people who emigrate to look for another job, or are discouraged to look for a job or need to stay at home to look for their family, among other reasons.
The INE also gave data about the number of people unemployed in the last quarter of 2013 that fell by 8,400 people when compared with the second quarter in 2013, while the number of people in working age fell by 73,400 people.
A total of 30,200 jobs were destroyed in the private sector and 34,800 in the public sector in the fourth quarter of 2013, while in 2013 as a whole a total of 121,400 jobs were destroyed in the public sector and 77,500 jobs in the private one.
The INE reported that employment increased in the agriculture sector by 85,200 jobs in 2013, while falling by 35,200, 6,000 and 109,100 in the construction, industry and services sectors respectively.
The Spanish government considered unemployment’s data as positive because “Spain’s unemployment rate does not increase in annual terms,” Spanish State Secretary for Economy Fernando Jimenez Latorre stated.
Spain’s main opposition party, PSOE, asked the government to be prudent because of that optimism as they think it is not possible to talk about recovery yet, adding that “we cannot wait for unemployment to fall because of emigration and discouragement.” 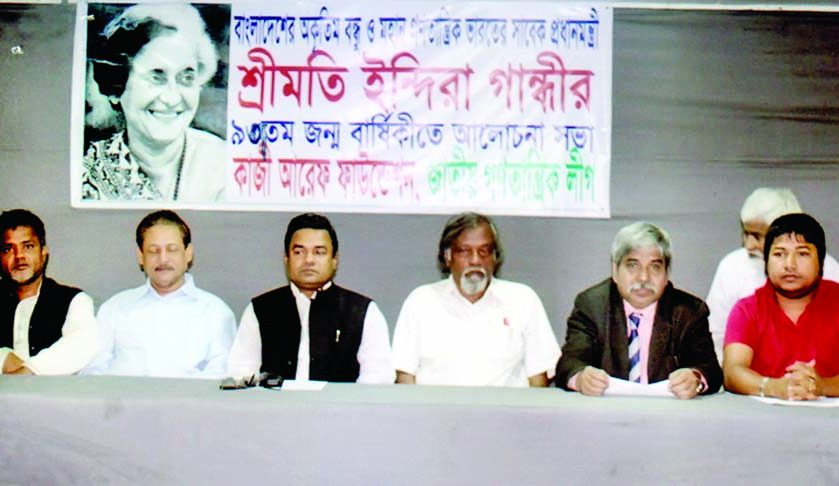 Parliament member and BNF President Abul Kalam Azad, among others, at a discussion organised on the occasion of 97th birth anniversary of former Prime Minister of India, Indira Gandhi at Bangladesh Shishu Kalyan Parishad Auditorium in the city on Friday.

Sheikh Rakibul Karim, acting CEO of Guardian Life Insurance Limited (GLIL) and Mahmud Hasan, Head of Human Resources of Wings Group, exchanging document after signing an agreement on behalf of their companies recently. Under the deal, Wings Group employees and dependent family members would be covered for life and obtain medical benefits. Senior officials from both sides were present.