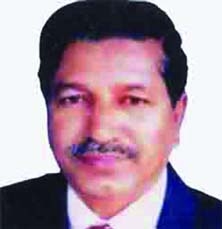 BSS, Tangail :
Awami League leader Shawkat Momen Shahjahan, a legislator from Tangail-8 constituency and a valiant freedom fighter, was buried in a grave adjoining to his father’s grave at the Sakhipur Women’s College graveyard here after his fourth Namaj-e-Janaza held in the afternoon yesterday.
The senior Awami League lawmaker fell ill all
on a sudden at his residence at Sakhipur upazila headquarters at around 5-30 in the morning yesterday. He was immediately rushed to Sakhipur Upazila Health Complex where the attending doctor declared him dead. He was 63.
Late Shawkat Momen Shahjahan left behind his mother, a son and a daughter and a host of relatives and admirers to mourn his death. A pall of gloom descended among people from all walks of life when the news relating to the popular leader of the ruling Awami League spread in the area. People from all strata in the constituency rushed to his residence to have a last glimpse of the soft-spoken AL leader.
The first Namaj-e-Janaza of Shawkat Momen Shahjahan was held at the South Plaza of the Jatiya Sangsad (Parliament) at 2 pm, the second at his home constituency at Basail High School ground at 3-30 pm, the third at Sakhipur Upazila Parishad ground at 5 pm and the last at Sakhipur Residential Women’s College ground.
In separate condolence messages, President Md Abdul Hamid and Prime Minister Sheikh Hasina expressed deep shock at the demise of Shawkat Momen Shahjahan, MP.
Besides, Speaker Dr Shirin Sharmin Chowdhury, Deputy Speaker Col (Retd) Shawkat Ali, Awami League general secretary and LGRD Minister Syed Ashraful Islam, Health Minister Mohammad Nasim, Post and Telecommunications Minister Abdul Latif Siddiqui, Information Minister Hasanul Huq Inu, Communications Minister Obaidul Quader, former Food Minister Dr Abdur Razzak, Tangail District AL general secretary and administrator of District Council Fazlur Rahman Khan Faruque, among others, expressed profound shock at his demise.
AL leader Shawkat Momen Shahjahan was elected as a lawmaker from Tangail-8 (Basail-Sakhipur) constituency in 1986, 1999 (by- poll) and 2009 and he was elected unopposed in the polls to the 10th parliament on January 5.
In the 9th parliament, Shawkat Momen Shahjahan discharged his responsibilities as the chairman of the Parliamentary Standing Committee on Agriculture Affairs Ministry and a member of the Parliamentary Standing Committee on the Liberation War Affairs Ministry.

Business Desk :The submission deadline for the SME category at the 5th HSBC Export Excellence Awards has been extended till 28 July 2014. SME exporters with annual export turnover (non RMG/Textiles) of less than US$5 million can submit their nominations to be selected as one of five ‘Exporter of the Year’ titles. The nomination deadline for SME category has been extended based on numerous requests from the exporters in SME sector. Nomination criteria and other requirements will remain the same....
July 14, 2014