Festival of kite, colour and fire 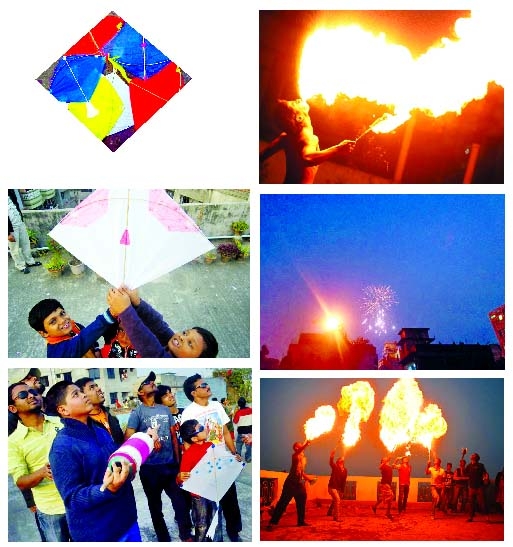 Maria Mohsin :
The Shakrain festival (Ghuri Utsab) or Poush Sangkranti is a festival of Bangladesh celebrated at the end of Poush (the 9th month of the Bengali calendar).
January 14 or 15 in Gregorian calendar is the day of celebrating this festival.
The Shakrain festival is mainly seen to be observed in southern part of Dhaka city, which is known as old Dhaka. Shakrain is one of the most beautiful and important attractions of the historical old Dhaka. On that day you one can certainly catch the difference between the two parts of Dhaka only seeing the sky, because the sky of old Dhaka is hardly seen as it is covered with colourful kites.
Residents of old Dhaka celebrated the Shakrain festival with much gusto. Kites of various shapes and colours soared high all day long on the day. After sunset, fireworks and fire spitting traditionally close out the day.
At night, fireworks lit up the sky and flame-eaters dazzled everyone with their unusual skills of manipulating fire. The kites cover the sky in the day and the sparks of fireworks and Fanush cover it in the night.
Though this festival is thought to be a Hindu religious festival and that is why is not popular in many part of the city as well as the country. But the old Dhaka shows the unity of the habitants of the country.
In old Dhaka, it is not a matter of concern that what religion you are from, how much asset you have to celebrate the festival and how big you space have.
Each and every rooftop of old Dhaka can be seen crowded with people and there can be a kite find in each inch of the sky.
Each rooftop can be seen with fireworks. Even if there is no firework material at any house a flam of fire is seen in every house. It’s a festival of colour, joy, fire and unity of an area.
DJ party, kite-fight with commentary by the help of mike is now seen as the modern element the part of the city.
Shakrain festival or Poush Sangkranti no matter what you call this festival, it is a festival of kite, colour, fire and more over joy for the Bangalees. It is said if you haven’t seen the Shakrain of old Dhaka, you haven’t seen the real Dhaka yet.

Legend of Rupganj secure emphatic win BSS, DhakaAn impressive all round performance from legends of Rupganj saw them to earn an overwhelming six wickets victory over Sheikh Jamal Dhanmondi Club in their 11th round match of Walton Refrigerator Dhaka Premier Division Cricket League(DPDCL) held on Sunday at the Sher-e-Bangla National Cricket Stadium at Mirpur.The match was reduced 45 overs- a-side due to fog on the ground.Asked to bat first Sheikh Jamal Dhanmondi Club managed to score a mediocre total of...
December 15, 2014

Erfan Group Chairman and Managing Director Erfan Ali along with the group’s brand ambassador film actor Mousumi, handing over the key of brand new motorbike to a Erfan Chinigura rice dealer at the Annual Dealer Conference-2018 of the company at a convention center in the city recently. DMD Mahbub Alam, Executive Director Kamruzzaman, Finance Advisor Monir Uddin, Manager (Sales and Marketing) Ziaur Rahman and other senior officials of the company were also present.