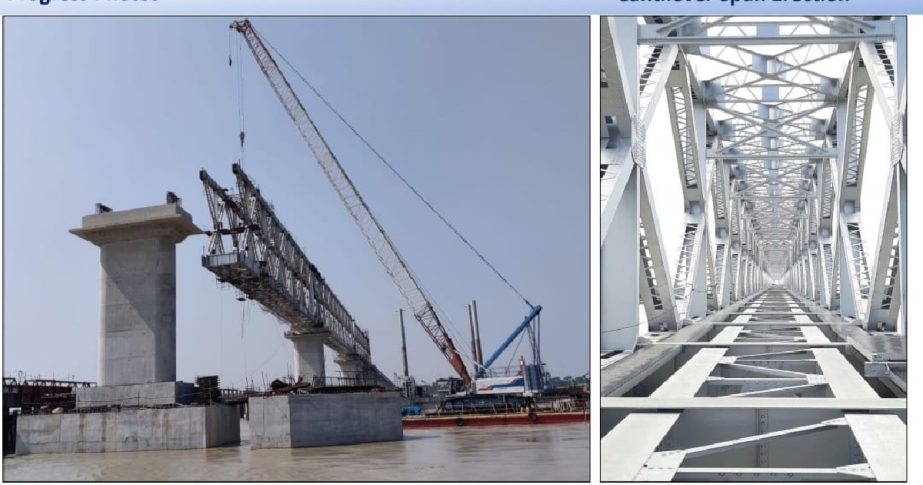 Rupsha rail bridge, part of the Khulna-Mongla port rail line project, will have 100-year longevity and it is a challenging engineering feat as it required specialized base grouting technology for piling work, says its project manager.

“The bridge has been constructed over the Rupsha tidal river and this was a challenging engineering feat,” Amritosh Kumar Jha told UNB.

He said everything has to be maintained properly to ensure longer longevity of the bridge and hoped that the bridge will bring multiple benefits.

Working in the navigation channel for safe movement of ships was a challenging job, said the project manager thanking all for extending support to them for successful implementation of the project.

The 5.13-km broad-gauge single-track railway bridge, taken up under India’s concessional Line of Credit (LOC), was completed on June 25.

The Rupsha rail bridge has been constructed by Indian EPC Contractor M/s L&T and has connected Khulna with the Mongla port city via a rail line.

The bridge also has additional features such as navigation fender piles upstream and downstream of the pier, for ensuring navigation safety in the river.

The navigational clearance for the main bridge is more than 18 m from Standard High-Water Level (SHWL).

The construction materials for the steel bridge superstructure were imported from India using road, sea and inland rivers.

The total project (Khulna-Mongla port rail line project) cost is US$ 388.92 million while the cost of constructing the Rupsha bridge is US$ 169.26 million.

The bridge also has additional features such as navigation fender piles upstream and downstream of the pier, for ensuring navigation safety in the river.

Once completed, the rail line would help increase the connectivity of Mongla Port, the 2nd largest port of Bangladesh, and provide an alternate route for rail and maritime trade. It would also allow other countries in the region to use the port and boost sub-regional trade.

The Rupsha railway bridge and the Khulna-Mongla port rail line will greatly facilitate the to and fro transportation of goods and the enhanced connectivity, officials said.

The accessibility to Mongla port will also improve market access for local businesses including for agricultural produce of farmers in the region, they said.

It is also expected to positively impact tourism to prominent spots in the south-western part of Bangladesh, according to officials.

The project for upgrading the Mongla port has been taken up under the third concessional LOC and includes construction of jetty no. 1 and 2 of the Mongla port at an estimated cost of US$ 530 million.

Mongla port is the second largest port of Bangladesh and has good inland connections to the business hub of Khulna.

Egis India Consulting Engineering Ltd has emerged as a “technically qualified” bidder for the PMC contract of the project, said an official. The value of the PMC contract is US$ 9.6 million.

The project would greatly improve sub-regional connectivity, trade and commerce and accelerate growth of the entire region, they said.

Disbursements under these LOCs had reached US$ 1155 million as of the close of the Bangladeshi financial year on 30 June 2022.

BSS, Dhaka :Speaker of Bangladesh Jatiya Sangsad Dr Shirin Sharmin Chowdhury said that the Commonwealth Parliamentary Association (CPA) could play a vital role in the development of democracy, good governance and sustainable development of the country.The Speaker said this while addressing the general assembly of the CPA at Cameroon’s capital Yaounde on Thursday, said a press release from the Jatiya Sangsad here on Friday.Dr Sharmin, who has been elected Chairperson of Executive Committee of the CPA, also expressed her firm...
October 11, 2014

About 1.8pc GDP lost due to disaster’