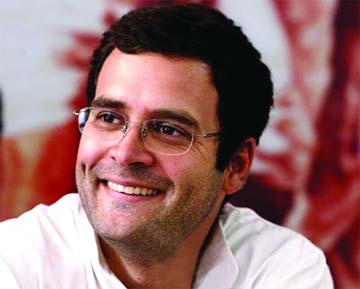 BBC Online :India’s governing Congress Party has named Rahul Gandhi to lead its general election campaign this year.But it stopped short of saying he would be its candidate for prime minister, as many had been expecting.Party president Sonia Gandhi, Rahul’s mother, said it was not party tradition to announce its candidate before elections, a spokesman told reporters. Polls show the Congress party doing badly amid a slowing economy and a string of damaging corruption scandals.The main opposition Bharatiya Janata Party (BJP) named Gujarat Chief Minister Narendra Modi its candidate for PM last September. Observers say Congress wants to avoid pitting its vice president in a presidential-style campaign against the charismatic but controversial Modi.”The Congress party president declared that the next election campaign will be led by Rahul Gandhi,” said a senior party leader Janardan Dwidedi after a meeting of senior party members on Thursday evening.He said “all the members” at the meeting had wanted Rahul to be named PM candidate “but the Congress president intervened”, AFP news agency reported.”She said: ‘This is not the party’s tradition. Just because some party has declared the PM candidate, does not mean that Congress will do the same’.” Correspondents say the Congress move appears aimed at protecting one of its main assets, in case the party loses the vote which is due by May.Latest polls show the BJP extending its lead. The new anti-corruption Aam Admi Party presents a new threat.

Bayern Munich’s Germany defender Jerome Boateng has called on more famous white sportspeople to add their voices to the chorus of outrage at the US police killing of George Floyd.Floyd, a black American man, died after a white policeman kneeled on his neck for several minutes. His death has sparked eight days of protests in US cities, some of which have turned violent amid accusations of further police brutality used against demonstrators.It has also seen athletes, sports teams and leagues...
June 5, 2020