Pro-AL UP Chairman hacked to death

Natore Correspondent :
A pro-Awami League (AL) union parishad chairman was shot and hacked to death by some unidentified miscreants at Shahpara in Singra upazila of Natore on Saturday.
The victim was identified as Fazlar Rahman Fanu, 65, chairman of Kalam Union parishad, and an activist of Singra upazila unit of AL.
Zunayed Ahmed Palak, state minister for information and communications technology, and Jahid Hossain, a nephew of the victim, however blamed BNP men for the murder. Fanu was a member of Awami League executive body in the upazila unit and also chairman of Kalam Union Parishad, said Mizanur Rahman, additional superintendent of police (ASP) in Natore.
Zunayed, said the killing was part of post-polls violence as Rahman had taken part in election campaign of the ruling party during the 10th parliamentary polls.
The uncle and nephew came under attack around 12:30pm at Shaoil village when they were returning to Kalam Union Parishad office in a motorcycle after attending a party programme at the upazila headquarters, the ASP said.
A group of unidentified miscreants riding some motorcycles waylaid the motorbike and swooped on them with sharp weapons, the ASP said.
They stabbed the duo indiscriminately, leaving both of them injured, he added.
Rahman was rushed to Natore Sadar Hospital, where the doctor declared him dead. Hossain said a group of BNP men led by one Karim attacked them. Law enforcers have launched a manhunt to nab the those responsible for the killing. 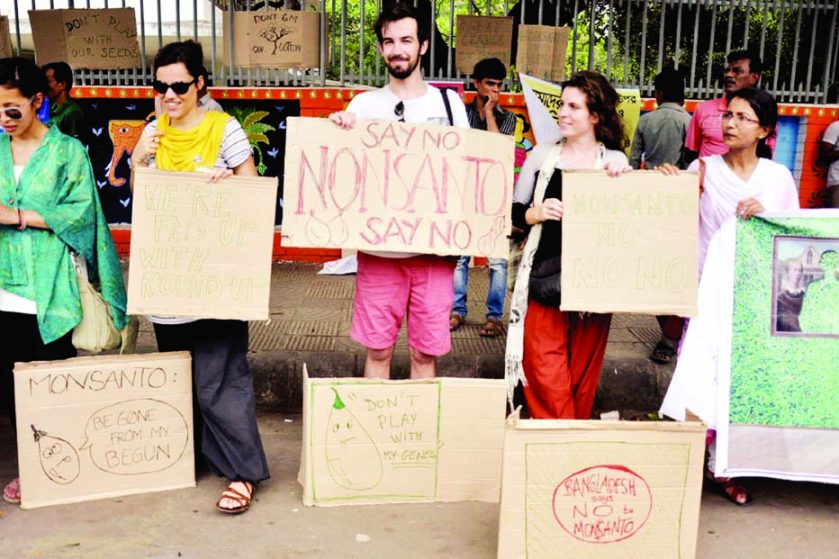 Different organizations formed a human chain in front of the Institute of Fine Arts of Dhaka University with a call to resist environment destructive Monsanto of GM Seed Company.