President for resolving all pending issues with India

President Abdul Hamid on Sunday laid emphasis on resolving all pending issues including Land Boundary Agreement of 1974 and its protocol of 2011 and water sharing of Teesta River between Bangladesh and India soon. The President expressed the desire when Indian High Commissioner Pankaj Saran paid a curtsey call on him at Bangabhaban on Sunday afternoon.
During the meeting, the President thanked the Indian government for operationalzing the Bheramara (Bangladesh) – Bahrampur (India) 500-KV transmission line through which Bangladesh imports electricity from India.
The President also expressed satisfaction at the inauguration of Bangladesh- India joint venture coal fired power plant at Rampal, Bagherhat. The President hoped that the power plant will help meet the energy demand of Bangladesh.
President Abdul Hamid also expressed Bangladesh’s eagerness to join the sub-regional cooperation projects on hydropower involving Bhutan, Bangladesh, India and Nepal. President Abdul Hamid hoped that the relations between Bangladesh and India will continue to grow from strength to strength as both sides are expanding areas of cooperation for mutual benefit.
The Indian High Commissioner told the President that his country is sincere to resolve all pending issues with Bangladesh. He assured the President that he would do his best to further strengthen the relations between the two friendly countries.
Secretaries concerned of the President office were present. 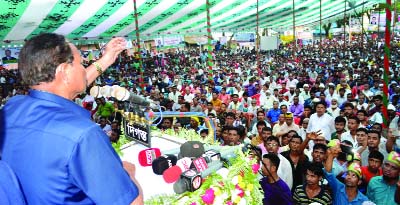 Discussion on Bangamata at BRUR

No one will interfere with Tseries’ rights, says the court