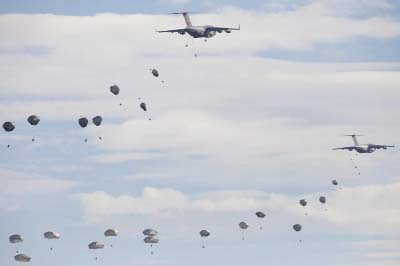 US paratroopers from the 82nd Airborne Division from Fort Bragg in North Carolina, jump of the US C-17 Globemaster aircraft during a NATO military demonstration in Zaragoza, Spain on Wednesday.

admin
AFP, Zaragoza :
NATO’S biggest military exercise in more than a decade sends a clear message to friends and foes alike that it is ready to face the challenges of a fast-changing world, alliance head Jens Stoltenberg said on Wednesday.
“While our aim is to train and exercise, we are also sending a clear message to our nations and to any potential adversary,” Stoltenberg said.
“Nato does not seek confrontation but we stand ready to defend all allies,” he said as troops, armoured vehicles and aircraft battled it out at the San Gregorio training grounds near the northeastern Spanish city of Zaragoza.
The training moves were part of the much larger Trident Juncture exercise launched last month.
The drill is putting some 36,000 troops through their paces for five weeks in Italy, Spain and Portugal to demonstrate the improved readiness levels Nato judges necessary to cope with new threats.
Leaders of the 28-nation, US-led military alliance, shocked by Russian intervention in Ukraine, agreed in September last year to upgrade its rapid response force, more than doubling its size to around 40,000 troops.
They also approved setting up what is known as the Very High-Readiness Joint Task Force (VJTF), a smaller “spearhead” unit which can put boots on the ground within 48 hours, rather than the weeks and possibly months needed for the larger unit to get to a crisis spot.
“Trident Juncture is an important part of Nato’s long-term adaptation to a changed and new security environment,” Stoltenberg said.
If the Ukraine crisis provided the initial impetus, war and turmoil across North Africa and the Middle East are also major concerns for Nato.
Turkey, with Nato’s second largest armed forces, is especially exposed as the Syrian war drives millions of refugees onto its soil and then onto Europe, creating a major humanitarian crisis. Russian intervention in Syria and several incursions by its aircraft into Turkish airspace have also frayed nerves, although tensions appear to have eased recently as Washington and Moscow push for a political solution to the conflict.
Stoltenberg stressed that Russia had been invited to the Trident Juncture exercises, and complained that Moscow had not reciprocated when holding its own training drills.

Xinhua, Beijing :From Singles’ Day to the Internet Plus campaign, online connectivity is bringing changes to almost all sectors of China’s economy, and has become key to economic reform.China has the world’s biggest online community, with about half the population connected, changing the way people shop, pay their bills and the way they think. Complicated procedures have been simplified; decentralization has broken monopolies. These concepts are easily in the latest reform policies.Last year, the Communist Party of China decided to...
December 15, 2015

5 of a family suffer burn injuries in Keraniganj fire

No agreement yet between Barcelona and Messi’s father