UNB, Dhaka :
In the wake of increasing crimes in the capital by a section of foreign nationals staying in Bangladesh, the Special Intelligence Agency (SPA) has decided to maintain a data base on them to preserve their track records.
The decision was taken at a meeting held last week at the Ministry of Home Affairs following various crimes committed by a vested group of foreigners staying and overstaying in the capital.
An SPA senior officer told UNB that zonal officers of the agency have been
asked to compile the information at their respective zones about foreigners, who are engaged either in jobs, businesses or other activities. The zonal officials have also asked to make the data base providing information in details, including whether the foreigners have been staying here illegally.
Contacted, another senior SPA officer said a section of foreign nationals has been involved in different crimes like production and supply of counterfeit foreign currency notes, illegal voice over internet protocol (VoIP) trade, drug trafficking and smuggling.
On December 22, members of elite force Rapid Action Battalion (Rab) caught red-handed 37 people of different countries along with six Bangladeshis with huge illegal VoIP equipment worth around Tk 1 crore after a raid on a six-storey building at Uttara, sector-12. Of them, five are Chinese and 32 Taiwanese nationals.
On January 20, members of the Detective Branch (DB) of Dhaka Metropolitan Police (DMP) held three Pakistani nationals with one laptop and a bomb-making manual from their possession from the city’s Segunbagicha area. Police suspect that the detainees belong to the members of Pakistan-based militant outfit Tehrik-e-Taliban.
In 2013, some 100 foreigners involved in various criminal activities were arrested from different parts of the capital. Another detective official said the agency arrested six foreign nationals last week from the capital on charge of making fake dollars and preparing militant activities inside the country.
Most of the foreigners, detained by the law enforcers in the last one year, seemed to enter Bangladesh with tourist visas but they overstayed, he said.
Besides, he said, a large number of foreigners have long been doing jobs illegally in private companies and corporate bodies without any work permit.
Though there is no exact database about the activities of foreign nationals, he suspects that the number of foreigners, including Indians, working in Bangladesh would be about one lakh.
Intelligence sources said among the foreigners reportedly involved in criminal activities have been residing in the capital’s Uttara, Banani, Gulshan, Baridhara, Rampura, Karwan Bazar and Farmgate areas. Most of them are from Nigeria, Ghana, Congo, Libya, Iraq, Afghanistan, the Philippines, Algeria, Sudan, Tanzania and Uganda. 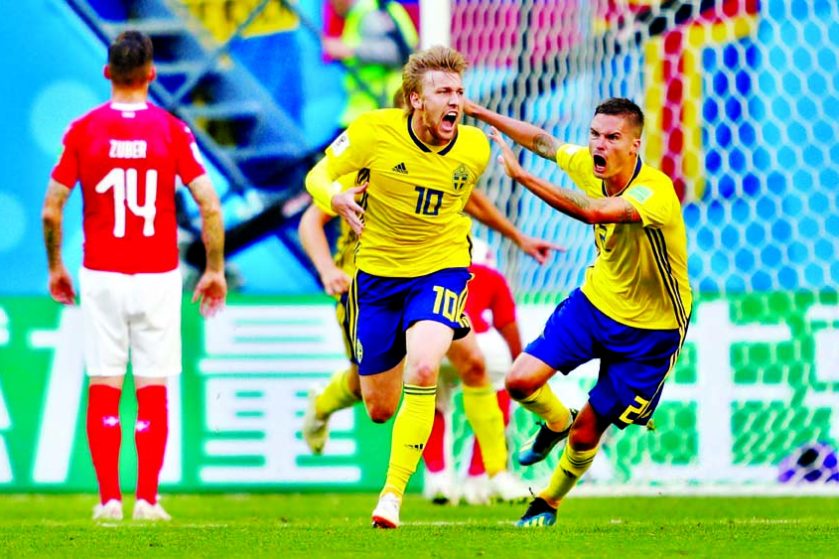 Sweden striker celebrates after netting a goal against Switzerland at 66th minute in World Cup round sixteen match in Russia on Tuesday.