AFP, Auckland :
Germany’s Philipp Kohlschreiber held off a gutsy fightback from Spain’s Pablo Carreno Busta to reach the second round of the Auckland Open on Tuesday.
Fifth seed Kohlschreiber, who won the Auckland tournament in 2008 and was a finalist last year, had to dig deep for a 6-2, 3- 6, 7-5 win over Carreno Busta.
The German looked to be cruising as he took the first set, before Carreno Busta’s serve found its range and Kohlschreiber found himself in a dogfight as his error rate climbed. 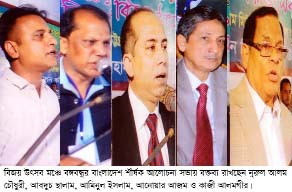 Speakers including CDA Chairman Abdus Salam at a discussion meeting on ‘ Bangabandhur Bangladesh ‘ held on the occasion of Victory Day in the city yesterday.