Awami League General Secretary and LGRD Minister Syed Ashraful Islam said yesterday that BNP Chairperson Begum Khaleda Zia has surrendered to the foreign diplomats for the political changeover in Bangladesh. “She (Khaleda) completely surrendered to the diplomats of different countries and unions for the political changeover in the country as well as going to power, but she failed,” said Ashraf while speaking at a press briefing at the AL chief’s Dhanmondi office on Tuesday afternoon. Lambasting BNP Chairperson Khaleda Zia for depending on foreign diplomats, he said, “No diplomat in the world has the power to make political changeover in Bangladesh although BNP Chairperson is lobbying with foreign envoys to gain power.” “All the way through she did nothing but only tarnished the image of herself and the country,” he added.The AL General Secretary further said that the world has changed and today’s world is not a bipolar world. “The world in which the Soviet Union and America were in the two sides does not exist now. This is a democratic world,” he said.He also called upon BNP chief to apologize to the nation within the next 24 hours for her remarks over the joint forces drive in Satkhira involving a neighbouring country. “Her remark was tantamount to sedition and the government will take appropriate action if she does not seek apology,” he added. BNP Chairperson while addressing in a public rally at city’s Suhrawardy Uddyan on Monday said “unknown faces” were seen in the joint forces during the recent operation against Jamaatmen in Satkhira. “The joint forces are torturing the ordinary people in a small place like Satkhira, killing our mothers and sisters. Nobody can say for sure if only joint the forces were there in the Satkhira operation. People have doubts about it,” Khaleda had told the rally.”How can a responsible leader like Khaleda make such a comment which goes against the sovereignty of the country?” questioned Ashraf. 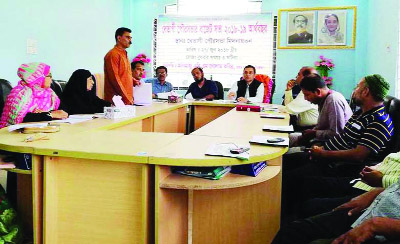 District watch in pictures: BETAGI(Barguna): The budget of Betagi Pourashava of Tk 32, 17, 85, 000 of 2018-19 fiscal year was announced at Poura Auditorium on Wednesday. Alhaj A B M Golum Kabir, Poura Mayor presided over the programme.

Radhika Apte opens up about working in digital medium

Chetan Bhagat speaks about what B’wood has given to India