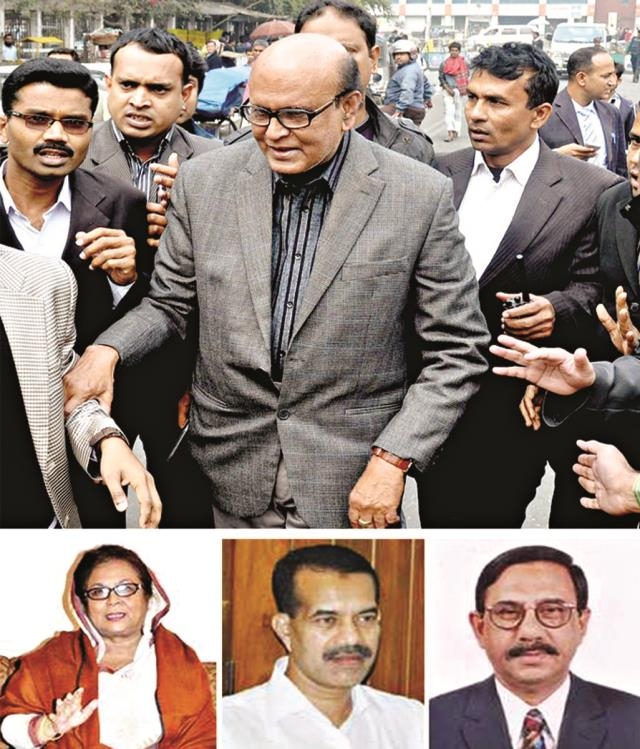 Detective Branch (DB) of police picked up eight BNP leaders including BNP chairperson’s adviser Khandaker Mahbub Hossain, BNP Vice-Chairman Selima Rahman and four lawmakers in a sudden crackdown on the opposition in the city on Tuesday. The DB later released four of those held. Mahbub Hossain, also Vice-Chairman of Bangladesh Bar Council, and former BNP lawmakers Nazimuddin Ahmed and Fazlul Haque Milon are now in DB’s custody, said Dhaka Metropolitan Police(DMP)’s Deputy Commissioner (media) Masudur Rahman . A team of DB of DMP picked up the BNP leader Selima Rahman from her Gulshan house at about 7:05pm, said DB source. Selima Rahman was arrested within an hour after her press conference at her residence from where she announced that the opposition’s ongoing 48-hour hartal be extended by 12 hours until 6pm Wednesday. Mahbub was held when he left the Jatiya Press Club, where he spoke at a discussion meeting on the January 5 parliamentary polls as the chief guest. The discussion meeting was organised by pro-BNP Bangladesh Sommilito Peshajibi Parishad. A team of DB police detained Mahbub Hossain around 2:00pm when he was about to leave Jatiya Press Club by his car. Farath Hossain wife of Mahbub Hossain was barred from visiting her husband, she said in front of the gate of DB. She said her husband did not commit any crime that he could be detained by the police. Mahbub was later taken to the headquarters of Detective Branch (DB) of police on Minto Road, said Masudur Rahman. Later, the detectives picked up six other BNP leaders from city’s Baridhara DOHS area. Police arrested BNP’s Organising Secretary Fazlul Haque Milon and Nazimuddin Ahmed. They were nabbed on Tuesday from a house at Dhaka’s Baridhara. Police released Joynal Abdin Farooque, MP, Harunur Rashid MP, Ashrafuddin Nizam MP, Jatiyatabadi Mahila Dal leader Shirin Sultana after arrest. A group of pro-BNP lawyers brought out a procession on the Supreme Court Bar Association protesting the detention. A DB team arrested BNP leaders Fazlul Haque Milon and Nazimuddin Ahmed, MP, from the city’s DOHS area. Jatiyatabadi Mohila Dal Shirin Sultana talking to the New Nation said police arrested the BNP leaders when they were in a meeting with BNP chief whip Jainul Abedin Farooque at his DOHS office. The meeting was attended, among others, by Lion Harun ur Rashid MP and Ashraf Uddin Nizam, MP. Condemning the arrest of Khandker Mahbub Hossain, vice-chairman of Bangladesh Bar Council, the Supreme Court Bar Association (SCBA) on Tuesday demanded his immediate release, terming the government action “undemocratic and snatching of fundamental rights.” Addressing a press conference after his arrest, SCBA President AJ Mohammad Ali, also adviser to the BNP chairperson, said such a desperate action of arrest soon after holding the ‘farcical and voterless’ general election appeared as a sign of mala fide intention of the government in future. “The government is apparently moving to establish one-party rule blocking the path of democracy,” he said. The SCBA President was sharply critical of the government’s action of “confining” BNP chairperson Khaleda Zia in her Gulshan residence and arresting senior BNP leaders. He said the whole world along with 16 crore people of the country have witnessed through the ‘farcical drama’ in the name of January 5 election.

Russia wants to fly over US with advanced digital camera

AP, Washington :Russia will ask permission on Monday to start flying surveillance planes equipped with high-powered digital cameras amid warnings from U.S. intelligence and military officials that such overflights help Moscow collect intelligence on the United States.Russia and the United States are signatories to the Open Skies Treaty, which allows unarmed observation flights over the entire territory of all 34 member nations to foster transparency about military activity and help monitor arms control and other agreements. Senior intelligence and military...
February 24, 2016

How will we live if Covid is here to stay?

Corporate Focus: Auronna Hoq, Chairman of Jago Bangla Group of Companies and Jago Bangla Foundation speaking at a discussion meeting on ‘Role of Media’ organised by Rural Journalists Foundation at Public Library auditorium in the city on Wednesday.