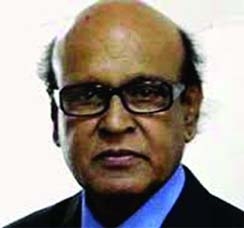 UNB, Dhaka :The High Court on Thursday granted ad-interim bail to BNP chairperson’s adviser and vice-chairman of Bangladesh Bar Council Khandker Mahbub Hossain in a case filed with the capital’s Ramna Police Station.An HC bench comprising Justice Naima Haider and Justice Jafar Ahmed passed the order upon a petition.The bench also issued a rule upon the government asking why Khandker Mahbub would not be given permanent bail.The ad-interim bail for Khandker Mahbub will remain in force until the rule is disposed, the court order said.On January 4, a day before the 10th general election, miscreants hurled 10-12 crude bombs targeting the office of Deputy Commissioner of Dhaka Metropolitan Police (Ramna Division) Maruf Hossain and the next day police filed the case under the Explosive Substances Act.On January 7, plainclothes police arrested Khandker Mahbub as soon as he came out of the Jatiya Press Club after attending a discussion meeting on the January 5 parliamentary polls.Meanwhile, upon a separate writ petition, another HC bench comprising Justice Salma Masud Chowdhury and Justice Habibul Gani on Thursday directed the authorities concerned not to harass Khandker Mahbub Hossain without due legal process.

Amari Dhaka celebrates the achievements of women in all spheres of life on International Women’s Day and Women’s Recruitment Day on March 8 2016. On this special occasion, Amari has organised a three-day activity specifically designed for lovely women to share their aspirations and pay respect to the women society on 7, 8 and 9 March. Also, Amari aims to attract passionate individuals to explore a range of employment opportunities on March 8.To pamper women, all the outlets will implement...
March 7, 2016

Bangladesh Labour Party forms a human chain in front of the Jatiya Press Club on Friday in protest against corruption in the Health Sector.

A reception was accorded to the meritorious students who achieved Chinese Government Scholarship from National Institutes of Technology (NIT) at its Conference Hall on Saturday.