Kazi Zafar-led Jatiya Party has joined the BNP-led 18-Party alliance. After the joining of the JP (Zafor), the BNP-led 18-party alliance has turned into a 19-party one.Kazi Zafar Ahmed, chairman of the faction of Jatiya Party, along with leaders of his party met BNP chairperson Begum Khaleda Zia at her Gulshan office in the city on Saturday evening and formally joined the alliance. Presidium Member of Ershad’s Jatiya Party Ahsan Habib Linkan also joined the alliance along with Kazi Zafar.Earlier in the afternoon, Kazi Zafar announced that his party is going to join the 18-party alliance. “We will join the 18-party alliance today (Saturday), turning it into a 19-party one,” he told a press conference at his residence at Gulshan in the city.He said that the decision of joining the alliance was taken at his party’s central working committee’s extended meeting in the afternoon.Kazi Zafar had broken away from Ershad’s Jatiya Party following differences over participating in the 10th Parliamentary polls. Then, he, what he said, reconstituted the Jatiya Party committee by removing HM Ershad.The former Prime Minister claimed that he is the real Jatiya Party chairman and described HM Ershad as a villain and his wife, Raushan Ershad, as the leader of the pro-Awami League JP followers. Replying to a question, he said the fall of the current regime is imminent. “No one believes this government and parliament will last for long.”Meanwhile, HM Ershad sacked Kazi Zafar from his party on November 29. 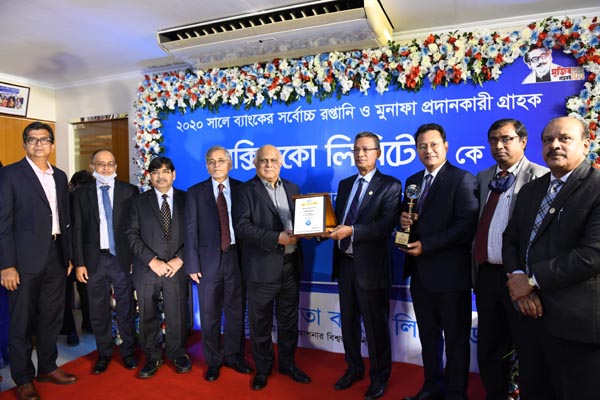 Sayed Naved Hossain, Director & CEO of Beximco Group, receiving the ‘Client of the Year’ award for being the highest exporter of Janata Bank Limited from the bank’s Managing Director Abdus Salam Azad, at a function held at the bank’s head office in the city on Thursday. Top officials from both sides were also present.

Involve youths in sports to save them from militancy: Hasan

Civil society’s acceptability on the wane