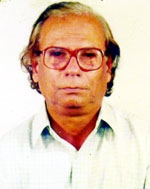 Elderly journalist Zakaria Siraji died of a heart attack at 9pm on Wednesday at the City Hospital at Lalmatia in the city. He was 74.After Johr prayers his namaj-e-janaza was held at Shia Mosque at Mohammadpur in the city yesterday. He was buried at the Shia graveyard at Drum Factory Road (behind the Prime Minister’s Office) on Thursday afternoon.Siraji began his journalist carreer with the weekly Holiday and then he worked with almost all the mainstream English dailies like New Nation, Independent, New Age and the recently published the Daily Sun.He was living at Tajmahal Road in Mohammadpur area and left behind his wife, two sons and a host of relatives and well-wishers to mourn his death.

It is genocide, says NHRC

Staff Reporter :National Human Rights Commission (NHRC) Chairman Kazi Reazul Hoque on Monday said that Myanmar’s persecution on Rohingyas was tantamount to genocide.“The killing, arson, torture and rape of Rohingya people by the Myanmar military and border guards is an unprecedented incident in the history of the world,” he said.The NHRC chairman said this in a press briefing at the Deputy Commissioner’s office of Cox’s Bazar after visiting Rohingya refugees at registered and unregistered camps in Ukhia and Teknaf upazilas....
September 12, 2017