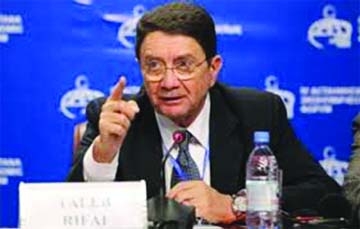 Xinhua, Madrid :
With just under a week before the FITUR international tourism exhibition’s opening in the Spanish capital city, Taleb Rifai, secretary general of the United Nations World Tourism Organization (UNWTO), has offered an interview with Xinhua to discuss key aspects of world tourism in 2013, another excellent year for the industry.
Following are the questions (Q) raised by Xinhua and answers
(A) given by Rifai: