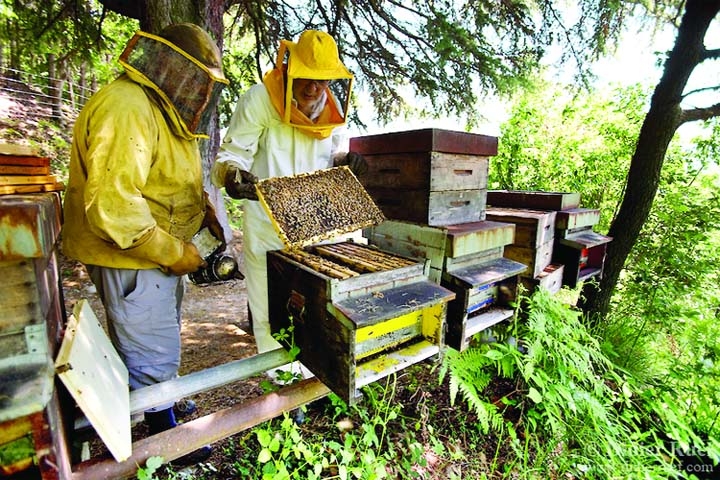 BSS, Rajshahi :
Honey farming has made Jarjish of Shayampur village under Paba upazila of the district a successful entrepreneur.
After taking loan of Taka 25,000 from Rajshahi Krishi Unnayan Bank in 2004, he had started the farming in different crop fields with six boxes and collected 400 kilograms of honey in the first year and 2,000 kgs in the following year.
“Now, I am collecting around 6,000 kgs through using 1,000 boxes every year from November to June,” Jarjish told BSS here Friday last narrating his success story.
He said he had invested around Taka 40 lakh in the business and constructed a one-storey concrete building and established a honey processing plant partly and processes around 200 kilograms of honey every week at present.
At least 200 kgs could be processed everyday when the plant will be full- fledged for proper marketing, Jarjish said.
He said two major corporate organisations of the country, Pran and ACI, are marketing his honey in different posh markets in the capital Dhaka at present.
Jarjish, who has set up a honey stall in the ongoing Dhaka International Trade Fair-2014, said there are many other honey hunters in the district and they harvest around 50 tonnes of honey every year and production can be doubled using modern technologies.
He also said the honey farmers, in many cases, were in unhappy condition over the business due to lack of proper marketing system.
In this regard, he said proper attention and technological support can make this honey production a huge-money business for the country.
He urged the concerned authorities to bring the honey growers under training on honey processing and its marketing.
Prof Dr Mahtab Ali of Zoology Department of Rajshahi University told BSS that honey farmers need technological support, financial assistance and a sound of marketing system.
“It’s possible to make the honey farming a million-dollar business for the country, creating huge jobs,” he said.
Prof Mahtab said Bangladesh can even export queen bees, candle and gum which will further contribute to the export. In Europe, each queen bee is sold at 50 euro.
He said many unemployed people can be involved in honeybee farming and the marketing process of honey, which will ultimately help reduce poverty apart from giving a boost to the country’s export earnings.
“Despite having enormous potentials, Australian and Indian honey is dominating our internal market,” Prof Mahtab added. He said, “This is unfortunate that Bangladesh does not have a single honey processing plant though it gets honey from different parts for six months throughout the year, whereas countries in Europe get it only for six weeks.”
“Even Nepal has honey processing units,” he said, seeking government support for the development of the prospective sector.
Citing an example, he said, “I saw a man in Vietnam producing a huge quantity of honey from 40,000 bee boxes. The same thing is possible here in Bangladesh.”
“If the government takes proper steps, honey production will get a boost in the country, ushering in a new opportunity for export,” Mahtab said, Bangladesh can produce two lakh tonnes of honey a year.

People Friendship Foundation A discussion and Iftar party organised for the destitute and disabled people by People Friendship Foundation was held in the auditorium of Bangladesh Shishu Kalyan Parishad in the city’s Topkhana Road. In the programme held on the sixteenth instant the speakers urged the government to take special care for the disabled and distressed people. The function was addressed, among others, by Chief Adviser and Coordinator of the foundation Gazi Mostafizur Rahman, Freedom Fighter Prof Asaduzzaman, DUCSU VP...
May 19, 2019