STAFF REPORTER
BNP Chairperson Begum Khaleda Zia said on Monday that the government do not have people’s support and it can’t hang on to power for long by using force. The fall of the repressive government will be ensured very soon.”
Addressing a mammoth rally at Suhrawardy Udyan in the city, she said that the present Awami League (AL) government is ‘ illegal and unacceptable, as the people boycotted the Januray-5 farcical polls’. She demanded fresh parliamentary polls as soon as possible under a neutral non-party government. She also called for holding an immediate dialogue to decide about the poll-time government.
The BNP, which boycotted the polls along with its alliance partners, arranged the rally as part of its countrywide programme to thank the countrymen for boycotting the “one-sided and farcical polls”. The rally was the first public meeting after the January-5 election.
Although Khaleda Zia from the press conference on January 15 announced the rally as a programme of the BNP-led 18-party alliance, the BNP held Sunday’s rally under its own banner. Senior leaders of the alliance addressed it except Jamaat-e-Islami, Islami Oikya Jote, Khelafat Majlis and Jamyate Ulamaye Islam, who are partners of the alliance.
The Dhaka Metropolitan Police (DMP) gave the permission for holding the rally on Sunday evening on 12 conditions. The conditions include the rally will be limited between 2:00 pm and 5:00 pm, prohibition from creating chaos, bar on transporting explosives, or wielding sticks and weapons at any cost. Another condition was that the rally would be held only under the banner of the BNP, as the party’s letterhead pad was used during submission of the application, seeking the permission for the rally.
The party’s letterhead pad is used for all applications of the alliance. But, yesterday’s rally was permitted only for the BNP. This condition was imposed probably to keep the Jamaat away from the rally.
Among the alliance leaders who addressed the rally included LDP president Col (retd) Oli Ahmed, BJP president Barrister Andaleev Rahman Partha, Jagpa chief Shaiful Alam Pradhan, BNP acting secretary general Mirza Fakhrul Islam Alamgir, the party standing committee members Dr Khandaker Mosharraf Hossain, Barrister Jamiruddin Sircar, Lt Gen (retd) Mahbubur Rahman and Dr Abdul Moyeen Khan and Jatiya Party ( Zafar) chairman Kazi Zafar Ahmed.
Khaleda Zia in her hour-long speech touched on different aspects of the failures of the government and involvement of the ruling party leaders in corruption. She also gave a brief outline of her future plans if her party is voted to power. She made it categorically clear that if voted to power her party would eliminate terrorism from the soil of Bangladesh. In this context, she recalled measures taken by her party when in power to eradicate terrorism through formation of elite force RAB.
The present government, she said, does not have people’s mandate to run the country. The voters turn out in the election was less than 5 percent, but the Election Commission (EC) showed it 40 percent three days after the election. Foreigners did not accept the polls, she said. “Investment will not come and aid will decrease if the government does not move for fresh election,” she said.
Referring to a newspaper report in a recent drive in Satkhira, she said, “The houses of the people were destroyed in a way which seems they were not people of the country. No citizen of Bangladesh can do this,” she said.
She blamed the government and the ruling party men for attacks on homes and businesses of Hindus in various parts of the country after the Januray-5 polls. The Hindus were subjected to torture just to cover up the government’s failure and create new issues to distract the eyes of international communities from other burning issues, particularly the issue of the Januray-5 farcical election, she alleged.
“The government has to bear all responsibilities because it has failed to ensure security of their lives and property and arrest the attackers.”
Giving a brief picture of the repression on her party leaders and activists, Begum Zia spoke about putting behind bar some senior party leaders including, Barrister Moudud Ahmed, MK Anwar and Barrister Rafiqul Islam Miah, implicating them in ‘false cases’. She demanded the release of all political leaders.
Begum Zia urged the youths and the people to get ready to protect the country and its democracy, saying that the country is going to lose its ‘its independence’ even after 43 years of its independence.
She was bitterly critical of the government for what she termed creating a reign of terror. The country, she said, is not safe in their hands. She was also critical of former president HM Ershad. 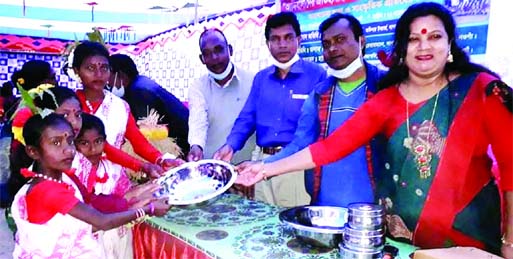 Nazaz Ahmad, Chairman, Board of Directors of Paramount Insurance Company Ltd. presiding over the 18th AGM at a city convention centre recently. The AGM approved 8percent Stock (Bonus Share) and 2 percent Cash dividend total 10 percent dividend for the year 2016. Significant numbers of Shareholders, Directors, Sponsors and Executives of the company were present.