Growth prospect of euro-area is under question

Nicholas Crafts :
Recent growth in the euro area has tracked the experience of much of Europe in the 1930s all too closely. Unless policies change, this stagnation is likely to persist. In some ways, the euro area’s prospects are more challenging than the parallel with the Great Depression suggests. If only things were as bad as in the 1930s-how’s that for a thought to put matters in perspective?
The aftermath of the Depression in Europe gives a vivid demonstration of the power of monetary policy. One group of countries stayed on the gold standard; others came off and devalued their currencies. The ones that exited-the sterling group, made up of Denmark, Norway, Sweden and the U.K.-could execute independent monetary policies. Deflation stopped, inflationary expectations went up, real wages adjusted, and output quickly revived. The countries that stayed on gold saw deeper falls in output and then grew more slowly for years. It took them until 1938 to restore output to its level in 1929.
The chart compares output growth in both groups with the euro area’s performance since 2007. The euro area’s recent experience is far closer to that of the gold-standard countries than to the sterling group’s. Members of the euro area lack their own monetary policies, just like the gold-standard countries in the 1930s. Compounding the problem, the European Central Bank is committed to an orthodox low-inflation-first approach. The results have been dismal.
It’s well-known that staying on gold paralyzed monetary policy in the 1930s and made the slump worse, while the countries that exited benefited from monetary stimulus and did much better. Less familiar is that leaving the gold standard also had big implications for fiscal sustainability: It made consolidating public debt far easier. In this respect, today’s euro-area countries are in even worse shape than their gold-standard counterparts.
To see the difference that leaving the gold standard made to fiscal sustainability, take the U.K. Stabilizing a rising ratio of public debt to gross domestic product usually requires a budgetary correction. Heavy debts and a high real interest rate make this needed adjustment bigger; rapid economic growth makes it smaller.
Partly by allowing lower nominal rates and partly by ending deflation, coming off gold reduced U.K. real interest rates from almost 6 percent in the late 1920s to 2 percent in the mid-1930s. At the same time, growth improved to 3.6 percent a year from 2.2 percent. Result: About a third of the fall in the debt ratio (from 179 percent in 1933 to 144 percent in 1938) was due to changes in growth and interest rates, rather than to budgetary changes. The adjustment was much less painful than it would otherwise have been.
Another aspect is worth noting. Lower nominal rates were combined with restrictions on capital outflows. This so-called cheap-money policy-which would now be called “financial repression”-was directed not by the Bank of England but by HM Treasury. In other words, monetary policy was dictated partly by debt-management goals.
This was part of a wider trend embracing many countries until as late as the mid-1970s: Central banks were subservient to finance ministries. Countries with heavy debts after 1945 were typically able to reduce them fairly painlessly, through fast catch-up growth and cheap-money policies controlled by governments.
Compare this with the euro area today. Many countries have heavy debts, limited growth prospects (they can’t restore their competitiveness by devaluing), and a central bank forbidden to take political direction or see debt-management as one of its objectives. Given all that, complying with the EU’s debt-sustainability rules will entail severe and indefinite budget stringency, clouding the prospects for growth still further.
From 2014 to 2023, Greece will need to maintain a primary budget surplus (that is, excluding interest payments) of about 9 percent of GDP. Italy and Portugal will need surpluses of about 6 percent, Ireland and Spain about 3.5 percent. This looks to be an impossibly tall order.
What are the fiscal lessons? First, avoid deflation (hence high real interest rates) at all costs. It would make things even worse. Beyond that, the options in theory would seem to be financial repression, debt forgiveness, debt restructuring and outright default. Financial repression, the time-honored remedy, would seem to be out of bounds-the ECB is not that kind of central bank-and EU governments aren’t yet ready to contemplate the alternatives.
At some point, they will have to. In the 1930s, the situation didn’t look so hopeless.

(Nicholas Crafts is a professor of economics at the University of Warwick.) 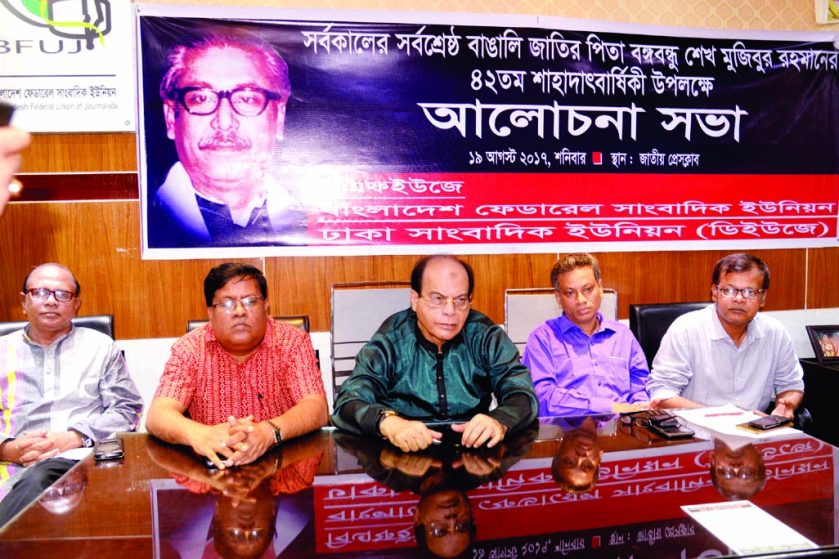 Prime Minister’s Media Adviser Iqbal Sobhan Chowdhury, among others, at a discussion on ’42nd martyrdom anniversary of Bangabandhu Sheikh Mujibur Rahman’ organised jointly by BFUJ and DUJ at its office in the city on Saturday.