Gene therapy ‘could be used to treat blindness’

BBC Online :
Surgeons in Oxford have used a gene therapy technique to improve the vision of six patients who would otherwise have gone blind.
The operation involved inserting a gene into the eye, a treatment that revived light-detecting cells.
The doctors involved believe that the treatment could in time be used to treat common forms of blindness.
Prof Robert MacLaren, the surgeon who led the research, said he was “absolutely delighted” at the outcome.
“We really couldn’t have asked for a better result,” he said.
BBC News exclusively reported on the start of the trial two years ago. The first patient was Jonathan Wyatt, who was 63 at the time. Wyatt has a genetic condition known as choroideremia, which results in the light-detecting cells at the back of the eye gradually dying.
Wyatt was still just about able to see when he had the operation. His hope was that the procedure would stop
further deterioration and save what little sight he had left.
He, like another patient in Professor MacLaren’s trial, found that not only did the operation stabilise his vision – it improved it. The other subjects, who were at earlier stages in their vision, experienced improvements in their ability to see at night. Wyatt is now able to read three lines further down in an optician’s sight chart.
“I felt that I had come to the edge of an abyss,” he told BBC News.
“I looked down at total blackness. Professor MacLaren tapped me on the shoulder and said ‘come this way, it’s possible to see again’.” Wyatt’s wife, Diane, confirmed that the prospect of total blindness had made him feel very depressed. “Now he is very optimistic,” she explained.
“My colour vision improved. Trees and flowers seemed much more vivid and I was able to see stars for the first time since I was 17 when my vision began to deteriorate,” he told BBC News.
Thomson said he had spent his life resigned to the fact that he would go blind.
“I’ve lived the last 25 years with the certainty that I am going to go blind and now (after the operation) there is the possibility that I will hang on to my sight,” he said.
When Thompson was first diagnosed, he was told that he would not be able to see his daughter, who is now nine, grow up. “Now I hope I’ll see my grandchildren grow up,” he told BBC News.
If the improvements seen in the patients continue, the aim will be to offer the treatment to younger choroideremia patients to prevent them from losing their sight. 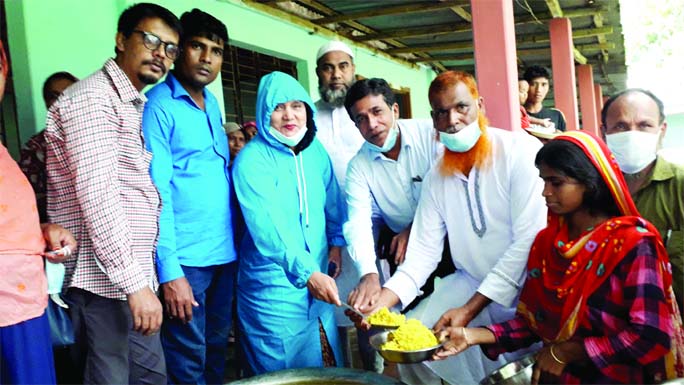 Faruk Alam Toby, Chairman of Boda Upazila Parishad of Panchagarh District, distributes cooking food among the flood-hit people of the upazila on Sunday.