A fire at a shoe factory in eastern China killed 16 people and injured five, state media reported, the latest disaster to highlight China’s poor workplace safety record.
The fire broke out at the factory in Wenling in the wealthy coastal province of Zhejiang on Tuesday, the official Xinhua news agency said.
More than 20 people were rescued and the injured were all in stable condition in hospital, it said. The cause of the fire was being investigated.
China, the world’s second-largest economy, has a bad record on workplace safety. Fire exits in factories, office buildings and shops are often locked to prevent workers taking time off or stealing, or even blocked completely. A fire at a poultry slaughterhouse in the northeastern province of Jilin in June 2013 killed 120 people. That blaze was blamed on poor management, lack of government oversight and locked or blocked exits. 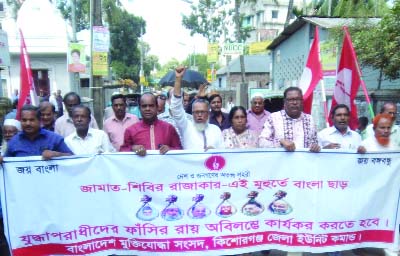 District watch in pictures: KISHOREGANJ: A procession was brought out by Bangladesh Mutijoddah Sangsad, Kishoreganj District Unit demanding early implementation of ICT verdict against all war criminals on Saturday.

Asian markets cagey after China data, eye on US jobs