Business Desk :
After consecutive gain on six days, share price index at the country’s twin bourses – Dhaka Stock Exchange (DSE) and Chittagong Stock Exchange (CSE) – registered loss on Monday, as prices of most of the issues decreased on the second session of the week.
The DSE benchmark index also came down from the recent highest level of 4565 points to 4550 on Monday, the day the opposition BNP organized a public meeting in the city to show its strength after the recent general election that it boycotted, giving way to the ruling Awami League’s one-sided win.
Both the major parties were locked in political battle for a couple of months that severely affected the country’s total business and commerce.
Trading at both the DSE and CSE began on positive note in the morning on Monday, but ended the day with nominal loss.
The volume of trade in terms of value was lower in both bourses on the day than on Sunday. The day’s turnover at the DSE also declined by about 100 crore.
The DSE benchmark index, DSEX lost 14.92 points or 0.32 percent to reach 4550.47 at the close of trading on Monday. Of the 292 issues traded, 124 gained, 133 declined and 35 remained unchanged.
Most of the traded issues of the day included those from petroleum, IT, Foods, Aviation, Textile and banking sectors.
Shares worth Tk 610.87 crore changed hands at the DSE on the day against Tk 708.07 crore on Sunday.
The day’s top 10 gainers at the DSE were Meghna Condensed Milk, Imam Button, Key & Que, Meghna Petroleum, Style Craft, INS Ltd, Dulamia Cotton, Midas Finance, Zeal Bangla, and JMI Syringe.
United Air, SPPCL, UCBL, Padma Oil, and Meghna Petroleum were the top most traded issues at the DSE in terms of both value and volume.
The CSE key index, CSCX lost 39.02 points to reach 8931.11 at the close on Monday. Of the 222 issues traded, 84 advanced, 120 suffered loss and 18 remained unchanged. The value of the traded issues was Tk 57.76 crore on the day against Tk 58.93 crore on Sunday.
Earlier, in the morning, the DSEX gained 14.28 points or 0.31 percent to reach 4579.68 at 11:15 am the CSCX gained 6 points to stand at 8976.14, also at 11:15 am Monday. 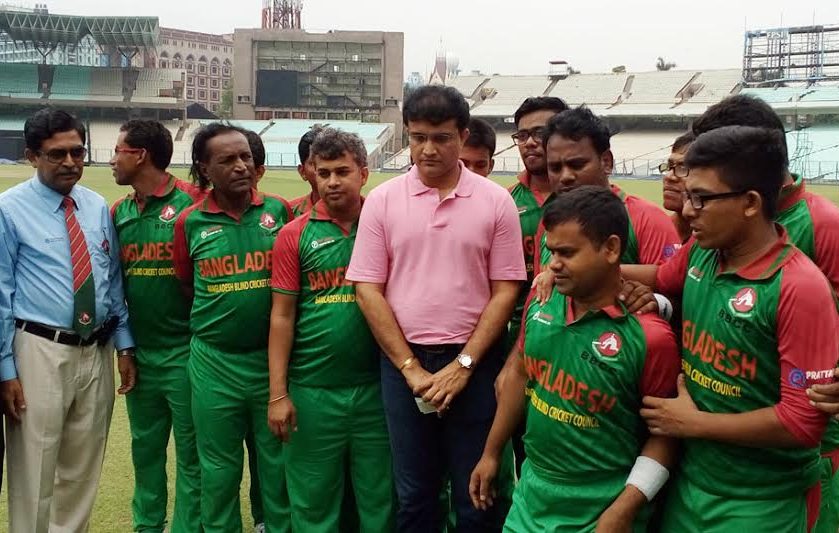 Members of Bangladesh Blind Cricket team with Sourav Ganguly pose for photograph at the Eden Garden in Kolkata on Wednesday.

Agriculture Minister Dr. Abdur Razzaque exchanges views with journalists about the 36th regional conference of Asia and Pacific Ocean at the conference room of the ministry on Monday. NN photo