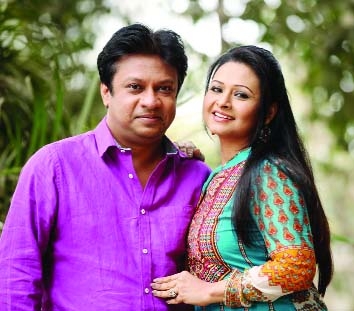 Entertainment Report :
In Pahela Baishakh last year, popular actor Intekhab Dinar tied the nuptial knot with popular TV actress Bijori Barkatullah. After wedding they had performed together in several TV plays. But as pair, they didn’t have experience to perform together in any special day’s play. For the first time, they performed together in a role of husband-wife in International Mother Language Day’s special play.
With the script written by Anamika Mondal and under the direction of Tuhin Hossain, Dinar and Bijori have performed as husband-wife in the play titled Aamar Ekush.
While sharing his feelings about the performance in the play Intekhab Dinar told this correspondent, “We have already passed our conjugal life more than nine months. I am cent percent happy to get Bijori. I was fan of her acting before starting my career. Now she is very matured actress. For this reason, I have a good impression about Bijori’s acting besides having respect to her strong personality. On the other hand, both of us criticize about our individual performances. I hope viewers will enjoy our play Aamar Ekush.”
Meanwhile, Bijori shared her feelings by this way, “As a person, Dinar is of high personality. In his mentality, there are some qualities which are not found in any person generally. His honesty always impresses me. As an actor, he is my best friend. He has an outstanding quality that is he has a capability to deliver script after reading only one time. I can’t do it one time. I am really felt jealous with this quality.”
Produced under the banner of Ghasphul the play Aamar Ekush will go on air in any satellite channel on the occasion of International Mother Language Day.
It may be mentioned that Dinar and Bijori first performed together in once popular drama serial Bondhon. In the serial, Dinar performed in role of Bijori’s husband’s younger brother.
Later they had performed together in many plays, including Kachhe Dure, Sporsher Baire, etc. They lastly performed together in play Kalantor.

The students calling for quota reforms to government jobs have postponed their protests following Prime Minister’s announcement that quotas will be abolished. Before call-off their protest, the protesters under the banner of Council for the Preservation of Bangladesh General Students’ Rights placed a number of demands including quick issuance of a gazette and the withdrawal of cases filed over the demonstrations.We welcome the decision of Prime Minister that she has accepted the sincere demands of the younger generation. And we...
April 13, 2018

‘People to give verdict against corruption’

DNCC Mayor Atiqul Islam inaugurates removal activities of waste of sacrificial animals in the city’s Vatara area on the first day of Eid-ul-Azha.