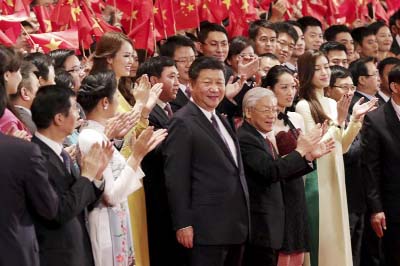 Reuters, Beijing :China and Vietnam are good socialist neighbours with a long-shared history of revolutionary friendship and should be able to dispel and survive any “disruptions” in relations, visiting Chinese President Xi Jinping said in Hanoi on Friday.The two communist-led states have competing claims in the South China Sea, which came to a head last year with Beijing’s parking of an oil rig in waters off the Vietnamese coast, leading to anti-China riots.Both agreed on Friday to maintain peace in the sea and build a relationship of trust.But trust may not come so easily. As Xi prepared to leave Hanoi, Japan’s Kyodo news agency reported Vietnam had invited a Japanese warship to visit its strategic Cam Ranh Bay base on the South China Sea and to hold their first joint naval exercises.Such an offer for special access is likely to antagonise China, which has also has fierce maritime rivalry with Japan in the East China Sea.Xi’s visit is timely, coming during uncertainty over what kind of Vietnamese leader will emerge from January’s five-yearly congress of a ruling communist party traditionally close to Beijing, but now getting unprecedented Western attention, from the United States in particular.In his speech to Vietnam’s National Assembly, Xi referred to Vietnam’s independence hero Ho Chi Minh and his amity with the founder of modern China, Mao Zedong, and their similar political systems.”China and Vietnam are joined by mountains and water and the friendship between our two peoples goes back to ancient times,” Xi said.”Our two parties, countries and peoples should be staunch in their faith, help each other and proceed hand in hand, not allowing anyone to disrupt our pace.”I believe … both nations’ peoples have the ability and the wisdom to dispel any disruptions,” he said.Xi made no mention of the South China Sea, nor indeed a brief but intense border war in 1979, when China invaded Vietnam to punish it for toppling the Chinese-backed Khmer Rouge in Cambodia.He referred only to “tests” both had faced in the winds of history. Relations, he added, must “not be allowed to stray from the correct path”.China’s land reclamation work on reefs near the contested Spratly Islands has fuelled resentment in Vietnam and put leaders in a difficult position, pressured from nationalists and even some party members to take a tougher line, but wary of upsetting Beijing.Any tacit Vietnamese support for U.S. calls for greater freedom of navigation also risks provoking a neighbour with which Hanoi shares $60 billion of annual trade, mostly imports from China.

Staff Reporter :Election Commission has withdrawn Humayun Kabir, the Commissioner of Khulna Metropolitan Police.Though not much details could be obtained, sources within the Commission told reporter the move was in interest of “the election environment”. Earlier on November 20, opposition alliance Jatiya Oikyafront wrote to the commission for withdrawing the KMP commissioner and some other police officials....
December 8, 2018