The central office of the BNP was opened on Thursday after 47 days. The party Acting Secretary General Mirza Fakhrul Islam Alamgir and some other leaders of the party visited the office at Nayapaltan in the city. But they stayed there only for a few minutes.
The Nayapaltan office remained shut from November 8, as police did not allow leaders and workers of the party to enter there. On that day, the BNP-led 18-party alliance announced a 72-hour general strike while police arrested some top leaders of the BNP hours after the announcement.
From November 30, the party office virtually became deserted following the arrest of the party Joint-Secretary General Ruhul Kabir Rizvi Ahmed, who was arrested from there on the day. Although the BNP leaders and workers could not enter the office, Rizvi Ahmed, along with few other leaders and workers, was staying there and announcing party programme to media in absence of the party senior leaders, such as Mirza Fakhrul, who with other leaders of the party, went into hiding on November 8.
During the arrest of Rizvi Ahmed, DB police on November 30 also allegedly ransacked the furniture and other belongings in the office. From the day, the Nayapaltan office remained closed virtually. Additional police were deployed in the office area and they kept the office under strict surveillance.
During the yesterday’s visit, Mirza Fakhrul and other leaders witnessed the ransacked rooms and furniture. Talking to reporters, the BNP leader said that his party was ready to sit in talks with the government, as there is no alternative to dialogue.
He came down heavily on the government for holding a ‘stage-managed and voter-less election’. He criticized the government for repressing the leaders and workers of his party and the alliance partners. The BNP leader demanded immediate release of the leaders and the workers.
The party Assistant Office Secretary Abdul Latif Jony said, “We have entered the office after 47 days. Police and members of other law enforcing agencies so long kept our office. We have not faced any obstruction today (Thursday).” 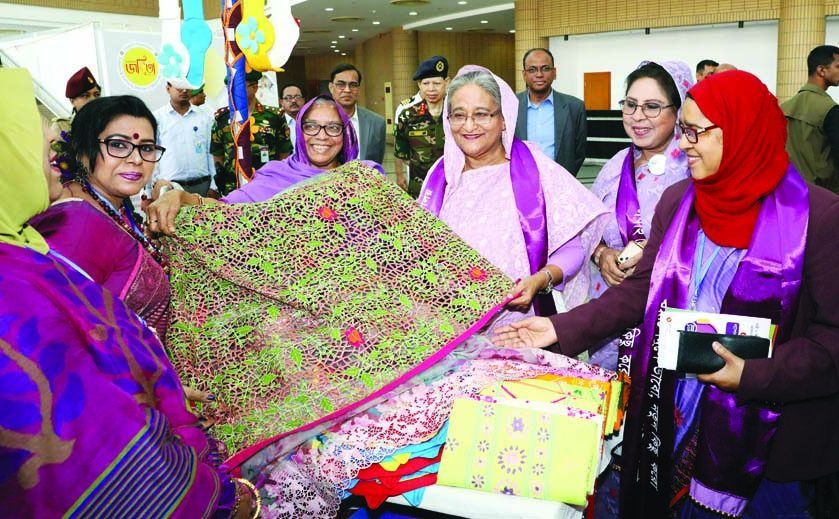 Prime Minister Sheikh Hasina visiting a stall of a fair organised on the occasion of International Women’s Day by the Women and Children Affairs Ministry at Bangabandhu International Conference Center in the city on Saturday.