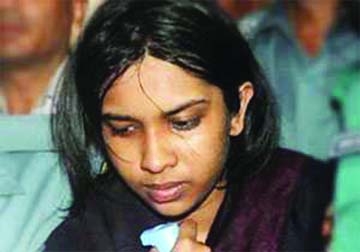 Court Correspondent :
A Dhaka court on Sunday rejected the bail petition of Oishee Rahman in a murder case filed against her on the charge of killing her parents Police Inspector Mahfuzur Rahman and his wife Swapna Rahman.
Magistrate Asaduzzaman Nur of the Chief Metropolitan Magistrate (CMM) Court of Dhaka passed the order after hearing.
The court asked the jail authorities to take an initiative to supply textbooks to
Oishee as she will appear at the ensuing O-Level examination.
On August 16 of last year, the decomposed bodies of Special Branch (SB) Inspector Mahfuz and his wife Swapna were recovered from the couple’s Chamelibagh house in the capital city.
After the killing incident, Oishee left their house with her seven-year-old brother Ohidur Rahman and domestic help Khadiza Khatun Sumi, 10, the following day.
On August 16, Oishee surrendered to Paltan Thana Police in the capital.
Later, Oishee made confessional statement Under Section 164 of the Code of Criminal Procedure. Then on September 5, the key suspect of the killing of the couple, sought to withdraw her confessional statement over murder of her parents.
Earlier, different courts including Dhaka’s Metropolitan Sessions Judge’s Court rejected Oishee’s bail plea.

State Minister for Information and Communication Technology (ICT) Zunaid Ahmed Palak on Monday said the government is working to build a startup ecosystem in the country by keeping a three-layered pyramid structure in mind.“The innovators will be on top of the structure. They might be few in number but will make great contribution in country’s IT industry. Achievers will be in second position, followed by people involved in small sectors like freelancing. That is how we are working to build...
January 24, 2017