AFP, Hong Kong :
Asian markets sank Friday, extending the previous day’s losses after disappointment on Wall Street over data showing the first fall in Chinese manufacturing activity in six months.
Japan’s Nikkei share index suffered another bruising day after the yen rallied against the dollar in New York as investors looked for safer investments.
Tokyo tumbled 1.94 percent, or 304.33 points, to 15,391.56, Sydney fell 0.42 percent, or 22.1 points, to 5,240.9 and Seoul ended 0.36 percent lower, giving up 7.03 points to sit at 1,940.56.
In afternoon trade Hong Kong was 0.88 percent lower but Shanghai rose 0.46 percent.
Global markets were sent tumbling on Thursday after HSBC said a preliminary reading of its purchasing managers’ index (PMI) for China fell to 49.6 in January.
The index is a closely watched gauge of the health of the Asian economic powerhouse. A reading above 50 indicates growth, while anything below signals contraction. The last time the figure for China dropped below the critical point was in July, when it stood at 47.7.
Losses on Thursday in Asia were followed by a sell-off in Europe and New York. On Wall Street the Dow dived 1.07 percent, the S&P 500 fell 0.89 percent and the Nasdaq lost 0.57 percent.
US shares were also weighed down by underwhelming corporate results, including from computer maker IBM and defence giant Lockheed Martin.
The weak China figures raised concerns about the global economic outlook, which in turn dampened investor appetite for riskier bets.
On forex markets the yen benefited from the subdued mood. In New York the dollar dived to 103.34 yen Thursday from 104.39 yen earlier in the day in Tokyo. In afternoon Japanese trade the greenback clawed back some losses, to sit at 103.93 yen.
In other currency trade the euro bought $1.3695 and 141.46 yen in Tokyo Friday, compared with $1.3692 and 141.49 yen in New York.
The data from China-a key driver of global growth- fuelled concerns about emerging markets at a time when the US Federal Reserve is winding down its stimulus programme, leading foreigners to repatriate their investments to the West.
Among the worst affected is Argentina, which on Thursday saw the value of the peso slump 11.1 percent against the dollar, its worst fall since 2002 and creating deeper challenges for a government wrestling with falling foreign exchange reserves and rising inflation.
Eyes will now turn to next week’s meeting of the Fed’s policy committee meeting to see if it announces any further cuts to its giant stimulus programme.
At its last meeting it said it would trim the bond-buying scheme by $10 billion a month to $75 billion from January, citing a pick-up in the US economy.
In Hong Kong, Chinese computer maker Lenovo rose 2.9 percent after announcing Thursday that it would buy IBM’s low-end server business for $2.3 billion.
The move will give Lenovo a platform to compete in that sector with US giants Dell and Hewlett-Packard and help it diversify away from the slumping PC market.
South Korean electronics giant Samsung ended up 0.62 percent despite reporting its first fall in quarterly profit in two years owing to a one-off bonus, a strong won and slowing sales of its high-end smartphones.
On oil markets New York’s main contract, West Texas Intermediate for March delivery, was up 18 cents at $97.50 in afternoon trade while Brent North Sea crude for March rose eight cents to $107.66.
Gold fetched $1,259.37 at 0610 GMT compared with $1,245.30 late Thursday. 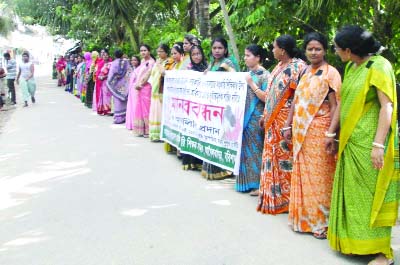 District watch in pictures: AGAILJHARA(Barisal): Primary school teachers of the upazila formed a human chain at Agailjhara town yesterday demanding punishment to the miscreants who raped a primary school teacher at Betagi Upazila in Barguna recently.