Another embarrassing defeat for Bangladesh 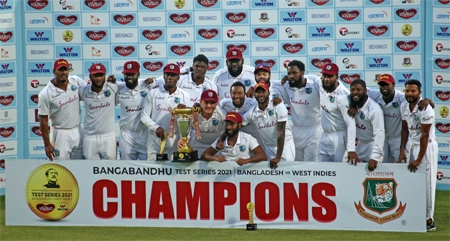 West Indies' players celebrate making a clean sweep of the two Test series against Bangladesh at the Sher-e-Bangla National Cricket Stadium in the city's Mirpur on Sunday.

Sports Reporter :
The West Indies clinched the two-match Test series 2-0 as they posted a narrow 17-run win over Bangladesh on the fourth day of the second Test at the Sher-e-Bangla National Cricket Stadium in the city’s Mirpur on Sunday. Earlier, the Caribbeans earned a three-wicket victory over Bangladesh at the Zahur Ahmed Chowdhury Stadium in Chattogram on February 7.
Electing to bat first, West Indies piled up a mammoth total of 409 in the first innings on the second day (Friday).
In reply, the Tigers made a remarkable 296 in the first innings on the third day ( Saturday).
Then West Indies were bundled out for 117 in the second innings on the fourth day.
Needing 231 runs to win, Bangladesh were all out for 213 in the second innings just 18 runs away from the victory target.
Bangladesh had a good start as the openers Tamim Iqbal and Soumya Sarkar contributed together 59 runs in the opening stand before Soumya (13) was caught at the first slip by Rahkeem Cornwall off Kraigg Brathwaite.
Tamim Iqbal hit a brisk 50. He struck nine fours in his 46-ball innings. It was Tamim’s 28th half century in his Test career.
Mominul Haque and Liton Das added 26 and 22 runs respectively to the Bangladesh total.
Mehidy Hasan Miraz kept Bangladesh’s hope alive hitting a superb 31. His 77-ball innings was ornamented with two sixes and three fours.
Cornwall captured four wickets instead of 105 runs, while Brathwaite and Warrican grabbed three wickets each for 25 and 47 runs respectively.
Cornwall claimed altogether nine wickets in two innings in the space of 179 runs. He was adjudged the Man of the Match for his match-winning bowling performance.
Nkrumah Bonner was adjudged the Player of the Series for his consistent batting performance.
Bonner was the only batsman of West Indies who shone with the willow in second innings making a notable 38.
Taijul Islam captured four wickets at the cost of 36 runs, while Nayeem Hasan grabbed three wickets in the space of 34 runs and Abu Jayed bagged two wickets for 32 runs.

Schoolgirl stabbed to death in Khagrachhari

Khagrachhari Correspondent :A schoolgirl, who was stabbed by a criminal at Golokpara area in Mahalchhari upazila of the district on Monday morning, succumbed to her injuries at Chittagong Medical College Hospital early on Tuesday.The deceased was identified as Ayna Marma, 12, a Class VI student of Mahalchhari Ideal High School, and daughter of Monghala Chai Marma of the area.Quoting family members, Samayan Kabir, officer in-charge (OC) of Mahalchhari Police Station, said a criminal stabbed Ayna near her house in Golokpara...
28 Apr 2016, 12:00 am

Imrul Kayes (left) and Soumya Sarkar both ton-hitters toasting after putting on together 220 runs for the second wicket partnership during the third ODI between Bangladesh and Zimbabwe at the Zahur Ahmed Chowdhury Stadium in Chattogram on Friday. Bangladesh beat Zimbabwe by seven wickets.