2nd day of hartal passed off with poor response

Chittagong Bureau :
The second day of BNP- led 18- party alliance sponsored 48 hours hartal and non-stop road, rail and waterway blockade programme caused immense sufferings to the people, particularly commuters of the district and city.
Chittagong Railway Station Manager Shamsul Alam told this reporter that no trains as yet left Chittagong for other destinations due to non-arrival of intercity trains from other destinations to Chittagong.
Chittagong Metropolitan Police (CMP) control room sources said BNP activists damaged a few vehicles in different areas of the city yesterday.
Police drove away the strike campaigners in Bahaddarhat and Bakalia areas when they tried to take out processions around 9 am.
They exploded some handmade bombs, said the police official.Despite hartal-call, traffic was almost normal in the city since morning.
Babul Akter, Deputy Commissioner, Detective Branch of CMP said police detained two suspected pickets from different areas in the city. On the other hand Kotwali police rounded up 6 Shibir activists from Kotwali area yesterday morning while explosed a number of hand bombs.
In addition to huge rickshaws and CNG-run auto-rickshaws,all motorized vehicles excepting private cars plied as usual. Attendances in public, private offices and banks were as
usual.The long distance and inter-district buses however went off the road.Additional law enforcers were deployed at the key points of the port city.
The long distance and inter-district buses and other goods laden vehicles however stayed off the road due to hartal and blockade programme.
Chittagong Export Processing Zone (CEPZ) authority sources aid that operational activities inside the CEPZ went on in fullswing and attendance of the workers were almost normal.
All domestic and international flights at Chittagong ShahAmanat International Airport take off and landed according to schedule, Airport chief security officer Nazrul Islam said.
Operational activities including loading and unloading ofcargoes at 23 ships inside the port and outer encourage went on i8n full swing but transportation of export-import goods to and from the port jetty was hampered due to disruption in vehicular movements on the roads, Port Secretary Syed Farhad Uddin said. 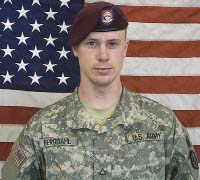 I was tortured as I tried to escape: Bergdahl