UNB, Pabna :
The law and order situation in Pabna took a frighteningly deteriorating trend during the last five-year tenure of the Awami League-led grand alliance government, much to the worry of the locals.
A total of 12,921 criminal cases, including 401 for murders, were filed with different police stations in the district during the last AL-led regime from January, 2009 to December, 2013, according to reliable sources.
Besides murder cases, 42 cases were filed for robberies while five for violence, 139 for rapes, nine for acid-throwing, 795 for women repression, 415 for child repression, 57 for abduction, 261 for burglary or cow-lifting, 413 for other thefts, 201 for possessing illegal arms, 1,502 for drug peddling or taking, 519 for smuggling and 397 for crimes like mugging.
Moreover, 7,674 more cases were filed for different other crimes. Year-wise statistics show 2,353 criminal incidents took place in the district in 2009, 2,761 in 2010, 2,569 in 2011, 2,647 in 2012 and 2,591 in 2013.
It is worth mentioning that many criminal incidents could not be counted as they had no records with the police stations concerned.
Asked about the progress of the criminal cases, local sources said only eight percent of the filed cases were disposed of.
Of the filed cases, 500 are related to politics. However, police refused to term the cases as political ones saying that those were lodged for various violent incidents under the Speedy Trial Tribunal.
BNP-Jamaat leaders claim that their leaders and activistswere implicated in false cases for political purposes and to harassthem.
About 25,000 Jamaat-Shibir activists were made accused in nearly 250 cases.
Of the accused, some 1,500 were arrested at different times on different dates.
On July 20, 2010, outlaws gunned down three policemen in remote Dalarchar in Bera upazila.
Though three and a half years have already elapsed, trial of the case has not been started yet.
On February 28, 2013, two local activists of Jamaat-e-Islami were killed as police opened fire on a procession brought out by the local unit of the Islamist party in the Sadar upazila protesting the verdict of International Crimes Tribunal against its leader Delwar Hossain Sayedee in a war crimes case.
On October 27, 2013, a Jamaat activist Julhas was killed when activists of Jubo League, youth wing of the ruling Awami League, attacked him at Sheikh Para in Ishwardi upazila.
On March 10, 2013, the body of Ibrahim Ali Mridha, vice-president of BNP Sadar upazila unit, was recovered in Kushtia three days after he had gone missing.
Till now,police could not find out any clue to the killing.
Another BNP activist Osman Gani alias Gama, 35, was killed in violence centring a union parishad election in Bera upazila on June 1, 2011. 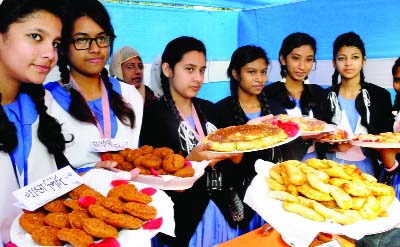 District watch in pictures: BOGRA: A daylong pitha festival was organised in Bogra jointly organised by Little Theatre and Bhorholo, a social and cultural organistion on Friday.

He was not abducted: IGP: `Mazhar should hold press confce`