Zimbabwe not worried about security: Chigumbura 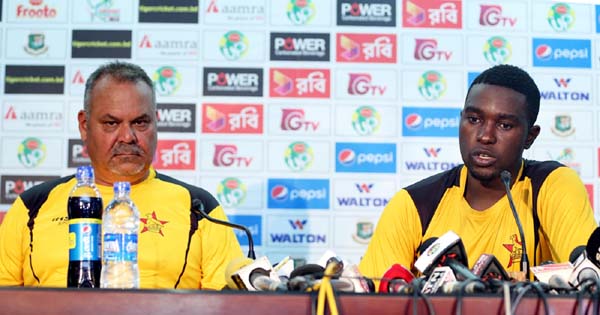 Captain of Zimbabwe National Cricket Team Elton Chigumbura on Tuesday ruled out any security threat during their tour to Bangladesh to play a three-match ODI and two-match T20 series against the Bengal Tigers.
Addressing a press conference after the first practice session at the Sher-e-Bangla National Cricket Stadium in Mirpur in the afternoon, the Zimbabwean captain said, “We came here to play cricket and left the security issues to the guys looking after it.”
The Elton Chigumbura-led Zimbabwean Cricket Team reached Dhaka on Monday on a two-week tour to Bangladesh.
This will be the first international series in Bangladesh since Australia postponed their two-match test series early last month due to security concersn. South African women’s team also deferred their arrival in Bangladesh twice showing different reasons.
“Sometimes a series ends badly, but the most important thing is to pick up yourself and focus on what’s coming next. We will make sure we play some good cricket here,” Chigumbura said when asked about how difficult it would be for Zimbabwe team to regroup after losing the series 2-3 to Afghanistan.
He is hopeful of a good series bringing forward the part that they have played here before. He mentioned, “Cricket is a funny game, anything can happen on any particular day or series. You can be on top and you can trip over in the next series.”
The Zimbabwe skipper was also asked whether the team would miss the experience of Hamilton Masakadza in this series, to which he replied that there are players in this team who are capable of bringing good results here. He mentioned that Hamilton is a good player, but the team has to move with selected players.
“There are always some positive things in any series. We lost 3-2 to a much improved Afghanistan, but there were some good positives from specific individuals and we are keen to bring those forward in the series we will play here,” Zimbabwe coach Dav Whatmore replied when asked about his team after losing series to the Afghans.
“Bangladesh enjoyed a tremendous World Cup, probably a hint of some luck due to the washed up game at Brisbane. Yet they played some good cricket and deservingly made it to the quarterfinals,” former Bangladesh head coach, Dev Whatmore, added.
After the lone warm-up match against BCB XI on Thursday, visiting Zimbabwe team will play a day-night basis three-match ODI series on November 7, 9 and 11 while a two-match T20 series on November 13 and 15, all at the Sher-e-Bangla National Cricket Stadium in Mirpur.
Meanwhile, Bangladesh Cricket Board on Tuesday announced a 13-member squad of BCB XI to play the lone warm-up match against touring Zimbabwe at the Khan Saheb Osman Ali Stadium in Fatullah.
Five players of Bangladesh national squad for the first two ODI matches against Zimbabwe were included in the BCB XI. They are ODI captain Mashrafe Bin Mortaza, Test Captain Mushfiqur Rahim, top order batsman Liton Kumar Das, all rounder Shabbir Rahman and spinner Zubaer Hossain.
BCB XI : Imrul Kayes, Anamul Hoque Bijoy, Liton Kumar Das, Shahriar Nafees Ahmed, Mushfiqur Rahim, Shabbir Rahaman, Mashrafe Bin Mortaza (Captain), Mehedi Maruf, Zubaer Hossain, Sanjamul Islam, Delwar Hossain, Shafiul Islam and Towhidul Islam Rassel
Earlier, the BCB announced the Bangladesh squad for the first two ODI matches of the three-match series against Zimbabwe:
Bangladesh ODI squad: Mashrafe Bin Mortaza, Tamim Iqbal, Liton Kumar Das, Soumya Sarker, Shakib Al Hasan, Mushfiqur Rahim, Mahmudullah, Shabbir Rahman, Nasir Hossain, Arafat Sunny, Zubaer Hossain, Mustafizur Rahman, Al-Amin Hossain and Kamrul Islam Rabbi
Zimbabwe squad: Elton Chigumbura, Sikandar Raza, Regis Chakabva, Chamu Chibhabha, Tendai Chisoro, Graeme Cremer, Craig Ervine, Luke Jongwe, Neville Madziva, Wellington Masakadza, Richmond Mutumbami, Taurai Muzarabani, John Nyumbu, Tinashe Panyangara, Malcolm Waller and Sean Williams.

Congratulations young booters We are happy at the efforts of our Under-15 national footballers who beat Pakistan to win the trophy. We think that it will inspire our senior footballers to improve their performance, shooting power, head and footwork to spring surprise in the Asian Cup in the near future. We believe that the ministry of Sports and the Bangladesh Football Federations will draft new plan in this regard..We again congratulate the Under-15 National Footballers who beat India in the...
November 7, 2018