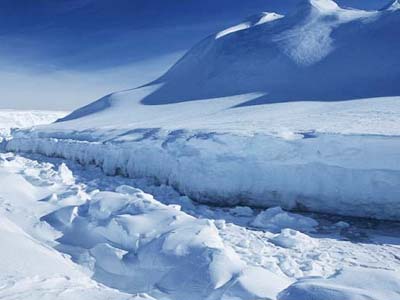 According to a new study

admin
PTI, London :
Annual snow accumulation on West Antarctica’s coastal ice sheet increased dramatically by about 30 per cent during the 20th century, according to a new study.
The last three decades saw more snow build up on the ice sheet than at any other time in the last 300 years, researchers said.
The study used ice cores to estimate annual snow accumulation from 1712 to 2010 along West Antarctica’s coast.
Until 1899, annual snow accumulation remained steady, averaging 33 and 40 centimetres of water, or melted snow, each year at two locations.
Annual snow accumulation increased in the early 20th century, rising 30 per cent between 1900 and 2010, according to the study.
The researchers found that in the last 30 years of the study, the ice sheet gained nearly 5 metres more water than it did during the first 30 years of the studied time period.
“Since the record is 300 years long, we can see that the amount of snow that has been accumulating in this region since the 1990s is the highest we have seen in the last 300 years.
The 20th century increases look unusual,” said lead author Elizabeth Thomas, from the British Antarctic Survey in UK. Thomas attributes the higher annual snow accumulation over the last 30 years in part to an intensification of a regional low pressure system and more storms in the region.
The researchers said these storms could increase with climate change, possibly leading to further increases in snow accumulation.
Snow accumulation builds up the ice sheet, but the extra flakes have not acted as a life raft for West Antarctica’s ice sheet, which previous research has found is rapidly thinning as the climate warms, Thomas said.
The size of the ice sheet depends on how much new snow accumulates and how much of the existing ice melts, she said.
Knowledge about how much new snow is laid down in West Antarctica each year could help scientists more accurately predict how the region’s coastal ice sheet could be affected by climate change and its contribution to sea level rise.
Earth has two ice sheets one in the Arctic, covering Greenland, and one sitting on Antarctica.
Ice sheets start their lives as snowflakes. When snowfall builds up year after year, the weight of the snow compresses the bottom layers into ice, creating an ice sheet.
For the study, researchers collected two ice cores from Ellsworth Land, the strip of land that connects the Antarctic Peninsula to the rest of the continent. The ice cores contain layer upon layer of ice – the remnants of yearly snowfall.