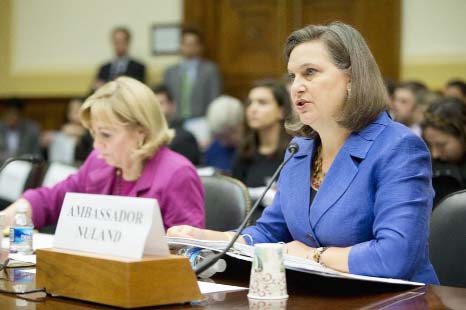 admin
AFP, Washington :
The United States said that Russia’s air war in Syria had “dangerously exacerbated” the conflict, accusing Moscow of seeking to bolster President Bashar al-Assad’s regime instead of targeting jihadists.
Washington’s latest broadside against Russian intervention in Syria came as government troops, emboldened by Moscow’s support over the past month, recaptured from the Islamic State group a key road into second city Aleppo.
It also came as Russian air force commander, Viktor Bondarev, said Thursday Moscow had sent anti-aircraft missile systems to Syria to back up its air campaign.
“We sent there not just fighter planes, strike aircraft and helicopters but also anti-aircraft rocket systems,” Bondarev told Komsomolskaya Pravda tabloid daily.
He said that Russia made the decision to bring missile systems to Syria because “we took into account every possible threat.”
Bondarev said Russia has “more than 50 planes and helicopters” in Syria, “precisely the number we need. At the moment, we do not need more.”
Speaking to the House Foreign Affairs Committee, US Assistant Secretary of State for Near Eastern Affairs Anne Patterson said the offensives, backed by Russian air strikes, had displaced at least 120,000 people.
“Russia’s military intervention has dangerously exacerbated an already complex environment,” she said.
“Moscow has cynically tried to claim that its strikes are focused on terrorists, but so far, 85 to 90 percent of Syrian strikes have hit the moderate Syrian opposition and they have killed civilians in the process,” Patterson said.
Civilians have died in Russian strikes on civil defense crews, hospitals, centers for displaced persons and ambulances, she claimed.
Meanwhile, Russia has sent anti-aircraft missiles to Syria in order to safeguard its jets involved in airstrikes against militants in the war-battered Arab country, the commander of the Russian Air Force was quoted as saying Thursday.
Russia has been carrying out airstrikes on Islamic State fighters in Syria since the end of September at the request of President Bashar Assad, Russia’s long-term ally.
Russian officials have insisted that their military involvement in Syria will be limited to an air force operation.
Col. Gen. Viktor Bondarev said in an interview with the daily Komsomolskaya Pravda that the anti-aircraft missiles are there to project Russian fighter jets from a possible attack or hijack while on mission.

UNB, Dhaka :War crimes suspect of Netrakona, Ramzan Ali, died at Dhaka Medical College Hospital (DMCH) in the city on Friday afternoon under police custody. He was 75.DMCH sources said, Ramzan who had been suffering from old-age complications breathed his last around 5:30 pm. He had been undergoing treatment at Ward No-601 of the hospital.Ramzan Ali was arrested from Narsingdi district on April 12 last for his alleged involvement in committing crimes against humanity during the country’s Liberation War in...
October 1, 2016

233 bottles of Phensidyl recovered in Chapainawabganj