Tribunals ‘in the offing’ for trial of recent terrorism

UNB, Dhaka :
Speedy trial courts will be set up in the country’s all divisional headquarters to bring to justice those committing terrorism amid judgment on war crimes and over January 5 parliamentary polls followed by attacks on minority communities.
Talking to UNB, Law Secretary Sheikh ASM Zahirul Haq said the formation of the special tribunals is underway though it may take time to form the courts for lack of logistic support.
The Law Secretary said a vested quarter carried out the terrorist activities like killings, vandalism and arson attacks at different parts of the country, including the capital, before and after the January 5 parliamentary polls.”
“Even, they made arson attacks on members of the Hindu minority community, burned down their houses, carried out looting and persecuted women,” he added.
Meanwhile, the Home Ministry has sent a letter to the Law Ministry seeking necessary steps for constituting special courts to hold the trial of the recent atrocities over the judgment on war crimes and 10th parliamentary polls.
Besides, a notification over setting up of special courts was issued on January 9 in consultation with the Supreme Court.
It was sent to the Supreme Court registrar, the Senior Secretary to the Public Administration Ministry, the Home Ministry, the superintendents of police and all session judges and additional session judges in all districts.
According to the notification, district sessions judges and additional sessions judges have been asked to hold trials of the recent terrorist activities until anti-terrorism tribunals are constituted and judges appointed for conducting those trials.
Referring to the notification, the Law Secretary said the victims of recent terrorist activities can now seek justice at the session judges’ courts and additional sessions judges’ courts.
Reminding the importance of forming anti-terrorism tribunals, the Secretary said the government has decided to constitute those tribunals so that the victims could get justice within a short period of time.
Sources said the Public Administration Ministry recently approved a proposal sent by the Law Ministry over formation of the special tribunals and the file is now being scrutinized at the Finance Ministry.
Confirming the matter, officials at the Law Ministry, wishing anonymity, said on getting approval of the Finance Ministry, the file will be sent to the secretariat committee and the Prime Minister, and finally, to the President for approval. 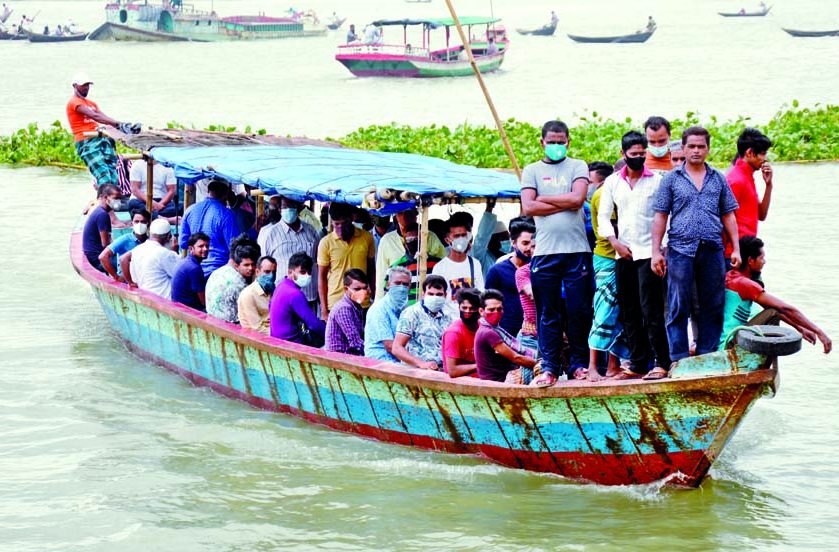 Commuters continue to cross the Buriganga River by wooden engine boat from Keraniganj to Dhaka everyday taking risk of lives even after seven days of the capsize ‘Morning Bird’ in the river that claimed 34 lives. This snap was taken on Monday.

Talks with BNP must for ‘PM’s graceful exit’: Moudud