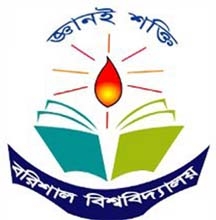 Our Correspondent. Barisal :
The ‘Second Barisal University Day’ observed Friday with amid acute crisis of teachers suffering the students by substandard teaching of inexperienced teachers.
The day was observed to mark the starting of BU classes by the education minister on January 24, 2012.
The programmes of the day included discussion meeting at afternoon and cultural functions at night in the temporary campus of BU on Barisal Zilla School premises.
Professor Md. Hanif, BU syndicate member, was the chief discussant in the programme styled as Environment and ‘Social Consciousness’ presided over by Prof. Dr. Harunor Rashid, vice-chancellor of the university.
Among others Pro.Dr. Muhsin Uddin, dean arts faculty, Manirul Islam, acting register, Prof. Shafiul Alam , president BU teachers association, Bahauddin Golap, president BU officers association, Dr. Humaun Kabir, acting deputy director, Md. Selim, secretary emplyees welfare association, Shamim Shikdar, student, Dr. Chandana Bose, guardian, addressed the programme.
Speakers and participants discussed the climate change effects in southern region and process of its adaptation.
They hoped that Barisal University would play vital roles in this coastal region most vulnerable to climate change affects by doing research works for facing, adopting and mitigating that issue.
However the BU students on occasion of observing the BU Day said they have only 72 teachers for more than 1,600 students of 16 departments including Mathematics, Chemistry, Computer Science and Engineering, Soil and Environment Science, Botany and Crop Science, Economics, Political Science, Social Science, Public Administration, Bangla, English, Law, Management Studies, Marketing, Accounting and Information Systems , Finance and Banking.
Almost all of the teachers were inexperienced to teach university level studies and guiding research as it was their first appointment for teaching, told a group of BU students.
Shafiul Alam, president of the BU teachers association, said that meritorious senior teachers not feel eagerness to serve here due to accommodation, transportation crisis, absence of research and less service and financial benefits.
Prof. Md. Hanif, BU syndicate member, said all newly established public universities have the same crisis and crisis would dissolved gradually as days would be passed.
Mentionable foundation of the permanent campus of Barisal University, the only general public university in the division and 33rd public university in the country, was laid by Prime Minister Sheikh Hasina on February 22, 2011 at Karnakathi on the eastern bank of the River Kirtonkhola in Sadar upazila of the district.
It will take 3-5 years to complete the construction of the infrastructure of the BU on 50 acres of land at the cost of Tk 95 core, BU VC added.

Primark pulls the crowds as stores reopen in England after lockdown

BBC : Long queues of shoppers snaked outside some stores in England from early in the morning on Monday, with discount fashion retailer Primark proving a big draw as non-essential shops reopened their doors after 83 days of lockdown.Queues formed outside several branches of Primark, which does not sell online so has not taken a penny in the country for weeks. In Birmingham, home to the world’s biggest Primark, the store opened early as hundreds of people lined up outside.Department...
June 16, 2020