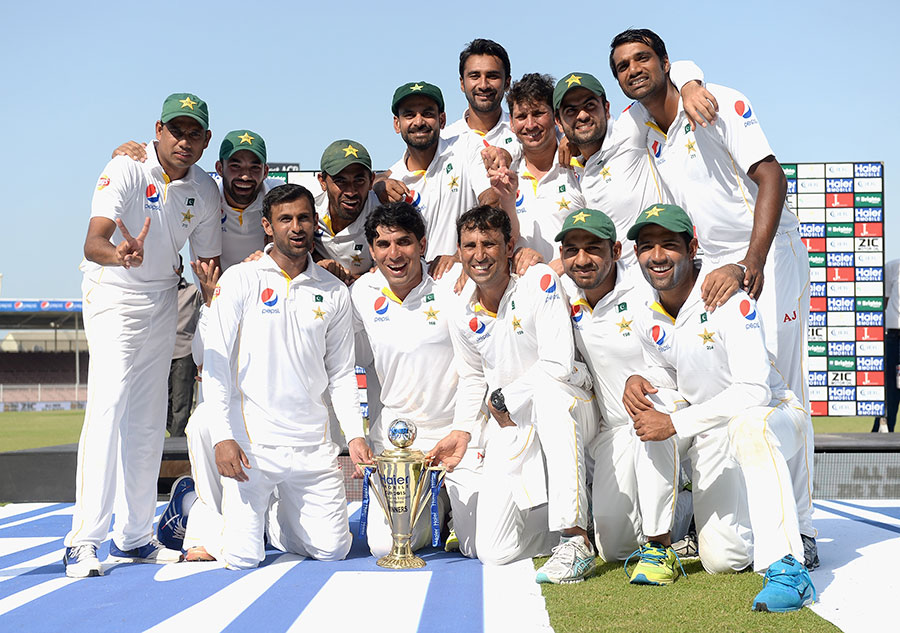 Misbah-ul-Haq poses with his Pakistan team and the series trophy after beating England 2-0 on 5th day of 3rd Test at Sharjah on Thursday.

AFP, Sharjah :
Spin trio of Shoaib Malik, Yasir Shah and Zulfiqar Babar shared nine wickets between them to help Pakistan beat England by a big 127-run margin in the third and final Test in Sharjah on Thursday.
Shah finished with 4-44, Malik — playing his last Test — took 3-26 and Babar grabbed 2-31 to bundle England out for 156 soon after lunch on the fifth and final day for a 2-0 series win at Sharjah stadium.
England, set 284 to win, were always on the back foot on a turning pitch as only skipper Alastair Cook showed some resistance during his 241-minute fight, scoring 63 with four boundaries.
It was Malik who gave Pakistan the prized wicket of Cook, stumped by wicket-keeper Sarfraz Ahmed, to finish with seven wickets in the match.
Shah had Ben Stokes stumped in the next over for 12 to spark celebrations in the field as Pakistan players embraced each other.
The victory lifts Pakistan to an equal highest ever number two in the ICC (International Cricket Council) Test rankings, a spot which they previously attained only for a few days in August 2006.
Pakistan won the second Test by 178 runs in Dubai.
Alastair Cook’s team fought well throughout the three Tests and was unlucky not to win the first Test in Abu Dhabi, forced into a draw due to bad light with just 24 needed for victory.
England are now pushed to sixth from their pre-series third in the Test rankings.
England were in danger of losing the match before lunch but Adil Rashid (22) helped add 49 for the seventh wicket with Cook to delay Pakistan’s win.
Cook punched paceman Rahat Ali for a single to reach his 46th half-century in Tests.
When the final day began England were rocked right at the start, losing four wickets in the space of 31 balls after resuming at 46-2.
Shah trapped Joe Root in the second over with a delivery that kept low and caught the batsman in front of the stumps before he had added to his overnight score of six.
James Taylor survived nine deliveries to score two before Babar spun one across his bat for Younis Khan to take the edge in the slip. In the next over, Shah trapped Jonny Bairstow leg-before for nought.
It became 59-6 when Samit Patel was leg-before in Babar’s next over, leaving England in fear of being bowled out for their lowest total of 72 against Pakistan when they crumbled in Abu Dhabi in 2012.
But the Rashid-Cook stand got England past the 100-mark before Rahat bowled Rashid with 15 minutes to go before lunch.

Life Desk :Green tea and its health benefits have been greatly extolled by the world. Here are a few.Green tea can be regarded as a storehouse of benefits for the skin. It contains a great deal of antioxidants which are effective against free radicals. These free radicals, which are formed when the skin is exposed to the UV rays of the sun, are accountable for premature aging.Green tea has also been found extremely effective in safeguarding the skin against sunburn...
July 18, 2014

Workshop on ‘Establishment of IQAC’ held at BUP

Impeachment hearing on Friday with ousted US envoy to Ukraine